Last month, Massport announced via press release that Eastern Salt was selected to develop two parcels of land within the Ray Flynn Marine Park. According to the press release, the parcels (7 & 8) are a combined 10.8 acres at the end of Fid Kennedy Avenue. The vision for the parcels is to create a multi-use bulk terminal that will complement their existing salt operation on Chelsea Creek and establish a new facility in Boston Harbor for receiving large and heavy bulk cargo. Eastern Salt will also unload and distribute road salt to customers south and west of the city.

According to the Boston Globe, the land comes with a large financial commitment. In return for the land, Eastern Salt will spend tens of millions of dollars to restore the North Jetty – a deep-water dock for the company’s use. This will allow the jetty to be available for other industrial users bringing in things like heavy machinery or power plant equipment.

Massport is hoping the berth will serve as the region’s nascent offshore wind industry. Massport’s nearby Conley Terminal is equipped to accept goods that arrive in shipping containers, not freestanding machinery. It was also announced earlier this year that Conley Terminal will be big ship ready by Fall of 2021 when Massport completes $850 million in waterside and landside infrastructure improvements to Conley Terminal. Enhancements include deepening of the main ship channels to 47 feet, expanded 1,725 foot turn basin, three new 22-wide ship-to-shore cranes, and a new 50-foot berth. In just a few short months, The Port of Boston will be able to accommodate vessels up to 14,000 TEU. So lots of changes coming to this part of the neighborhood. Great for the local economy and all but a little heads up to the neighborhood would have been nice.

Now Eastern Salt is hoping to gain access parcel M – an additional 3.5 acres – adjacent to the 10.8 acres already leased to them by Massport.

So what’s the big deal?

Well, for one – it’s a very large scale project and having a business like Eastern Salt affects the neighborhood in many ways – environmentally and traffic concerns to name a few. But the most concerning thing is that there was little transparency when it came to this project. As far as we know, there were no public meetings to present and discuss. There are community meetings about everything from the Edison plant project to cannabis shops to new restaurants being built. But no meeting about the Eastern Salt deal. Evidently, this project is not technically a “large scale project” like a development that needs a true public process ie. community meetings. It’s basically an assigning of the lease from EDIC to Eastern Salt with supervision/permission from the BPDA board.

Recently, Mayor Kim Janey spoke out against an Eversource substation going in East Boston and listed the environmental hazards of storing road salt as a reason not to allow the substation to be built in East Boston. Eastern Salt already operates in that neighborhood along the Chelsea Creek. (Evidently a cyanide-based anti-caking agent is used to prevent the salt from absorbing water and forming lumps.These are banned for health reasons in Canada.)

In addition to noise and air pollution from Logan Airport and traffic congestion, South Boston will now have the addition of salt and heavy cargo aka trucks coming in and out of that area of the neighborhood.

Our question is, how did this just happen without a public process? Not sure. The 10.8 acre deal with Eastern Salt is pretty much a done deal. But there is the 3.5 acres that is on the table. The BPDA held their monthly meeting on Thursday afternoon to discuss the additional land that Eastern Salt hopes to lease. This topic was not listed officially on the agenda – but it is included in the memo to the EDIC that it will be addressed at the BPDA meeting. According to Universal Hub, the BPDA voted 3-1 to begin negotiations for the lease of Parcel M. Board member Michael Monahan was against this proposal stating the last thing Southie needed was a giant salt pile. More to follow. 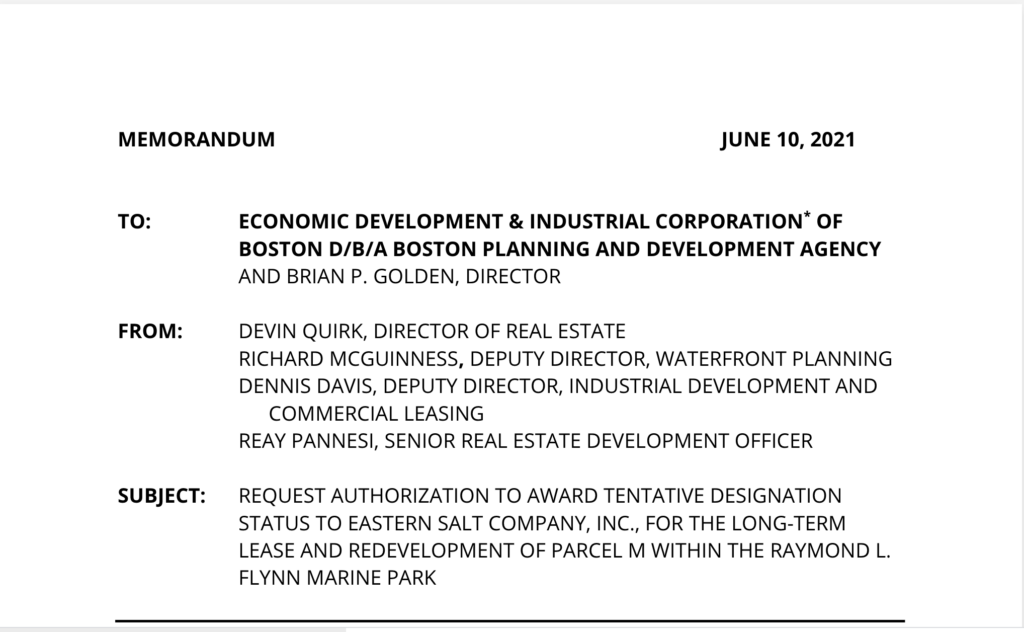 In September 2019, the EDIC, doing business as the BPDA issued a Request for Proposals RFP for the redevelopment of Parcel M within the Raymond L. Flynn Marine Park. This was the third RFP issuance for Parcel M including issuances in February 2017, March 2018 and September 2019.

Finishing Trades Institute of New England (“FTINE”)proposed redeveloping the existing building as a training facility for the finishing trades, including highly specialized glaziers and refinishers of marine-related ships, equipment & bridges.

Eastern Salt Company, Inc. (“Eastern Salt”or “Eastern”) proposed demolishing the existing building and using the land area to operate what is currently its road salt business-an expansion of its existing, successful businesses in Chelsea, MA and Staten Island, NY. The Leased Premises would initially function as area for the storage of de-icing road salts and as project cargo lay down area. The proposal also stated an intention to unify Parcel M with Moran Marine Terminal Parcels (“MMT”) Parcels 7 and 8 and with the North Jetty to create a marine industrial terminal.

Hey Pop Sugar – Showtime’s Shameless is not set in Southie!

Look no further – your private backyard oasis in the city has arrived! Whether entertaining or relaxing, you will love direct access from the kitchen – let the sunshine pour…

Located in behind East Milton Square, this spacious 3 bedroom, 1 bath is a true gem. The back deck is large enough to have great BBQ’s this summer, plus the…

Look no further – your private backyard oasis in the city has arrived! Whether entertaining or relaxing, you will love direct access from the kitchen – let the sunshine pour…

Located in behind East Milton Square, this spacious 3 bedroom, 1 bath is a true gem. The back deck is large enough to have great BBQ’s this summer, plus the…