The following incident happened on August 27th at approximately 5:05pm

A South Boston resident was walking home through the Seaport District with visions of putting his feet up on the couch and relaxing, when this happened:

As the resident walked along Seaport Boulevard, he noticed a Caviar bike courier in the bike lane. “The bright orange Caviar logo caught my attention.” A bit later, the courier was then riding the bike back in the opposite direction on the crowded sidewalk, The resident tried to step out of the way, but due to the rush hour crowd of pedestrians, there was no where for him to go. The courier was forced to stop and dismount of his bike. The courier was not happy and then cursed at the resident. The resident pointed out that the courier was riding the wrong way on the sidewalk and there was no where for him to go. Now here’s where it gets crazy.

The courier then allegedly spat in the resident’s face and attempted to ride away. The resident, very upset, pursued him and “roughly removed him from his bike” about 20 yards away. The courier fell to the ground and the resident thought about punching the guy but a bystander urged him to stop, so he let the courier go. The bystander then handed the resident a tissue so he could wipe off his face and continue to walk home.

The resident did go and fill out a police report (see below) and filed a complaint with Caviar. But without an identification of the courier, nothing can really be done. 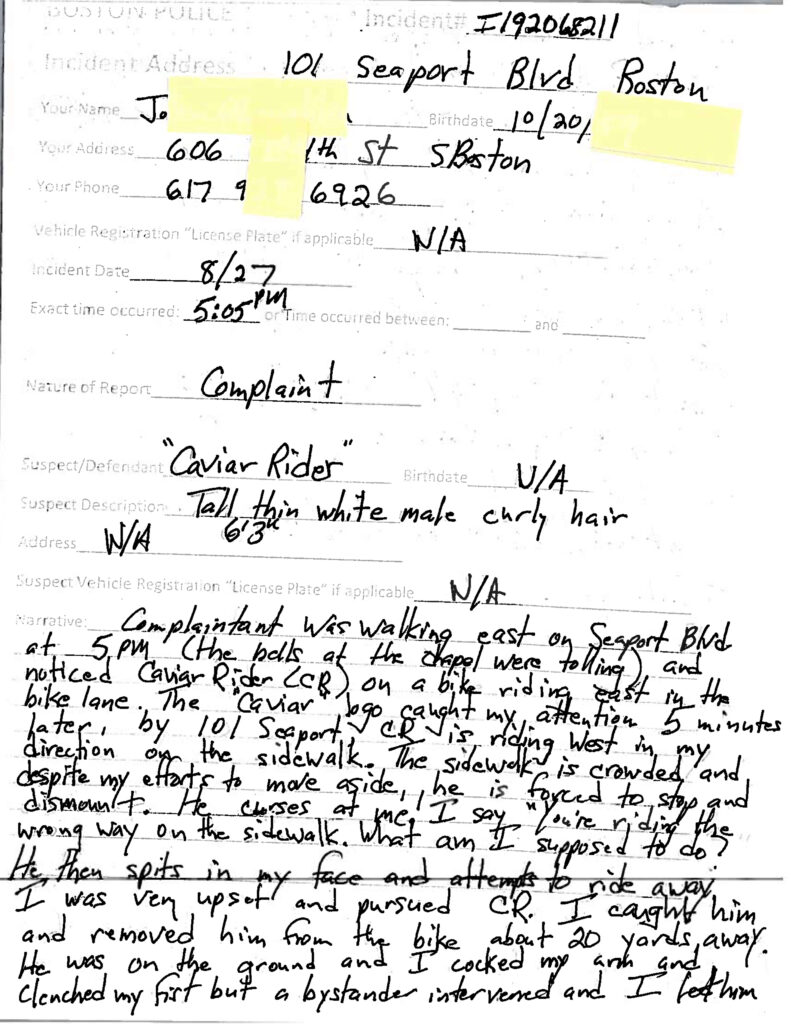 Unfortunately, the courier is still unidentified as of the moment. Just to clarify, the incident took placed in front of 101 Seaport Blvd. Boston around 5:05 P.M. We are going to check our system and have a run down on the couriers available around the area during 5:05 P.M.

If anyone witnesses this incident or can identify the courier involved, you’re encouraged to reach out to C-6 at (617) 343-4730.

Be safe out there, Southie!