Recently, the Mass. Convention Center Authority put out a request for proposals to develop three lots, making up more than six acres on D and E streets next to the Boston Convention and Exhibition Center in South Boston.  The lease would be for 99 years.

Two local developers have submitted bids for mixed-use developments. They include a potpourri of features to sweeten the pot, like a grocery store, retail, life science buildings, and a landing pad for “flying taxis” that haven’t even been developed yet.

According to the Boston Business Journal, the two proposals share similar items and ideas; they offer very different visions for the D Street corridor. One would put four towers near BCEC and bring nearly 2 million square feet of development to the neighborhood, while the other envisions a much smaller footprint.

The Cronin Group is the developer offering flying taxi landing pads.  The correct term is actually a “mobility hub” with a landing pad for battery-powered air taxis that take off and land vertically. According to the BBJ article, the Cronin Group wants to equip the space to be ready for the transportation of the future. Kudos for planning ahead!  Evidently, the aircraft is being developed by companies like Boeing and Toyota, and United Airlines plans a Manhattan-to-Newark air-taxi route in 2025.  Very Jetsen-like.

In addition to the flying taxi landing pads, the Cronin Group proposed a three-tower complex.  There would be a life science and office space, food halls, daycare, an art gallery, a 100-seat performance center, a grocery store, and a skywalk.  On E Street there would be 800,00 +square foot development for life sciences including a 243 feet tower.  Construction would take place in three phases.

The second proposal is submitted by Boston Global Investors, which is partnering with RISE Development, Bastion Cos., Cogsville Capital Group and the Walker Group. This is the smaller proposal with three buildings totaling more than 550,000 square feet that would include a grocery store, lab and office space, retail and community space with a “green roof” for urban farming. This part of the development would be completed in phase 1.  In the second phase, a five-story, 120-foot-tall, 350,000-square-foot lab and biomanufacturing facility would be built on E Street.

The bidding process to develop this part of the neighborhood is not without controversy.  The elected officials from South Boston wrote to David Gibbons, Executive Director of the Mass. Convention Center Authority a letter in opposition to leasing the land. 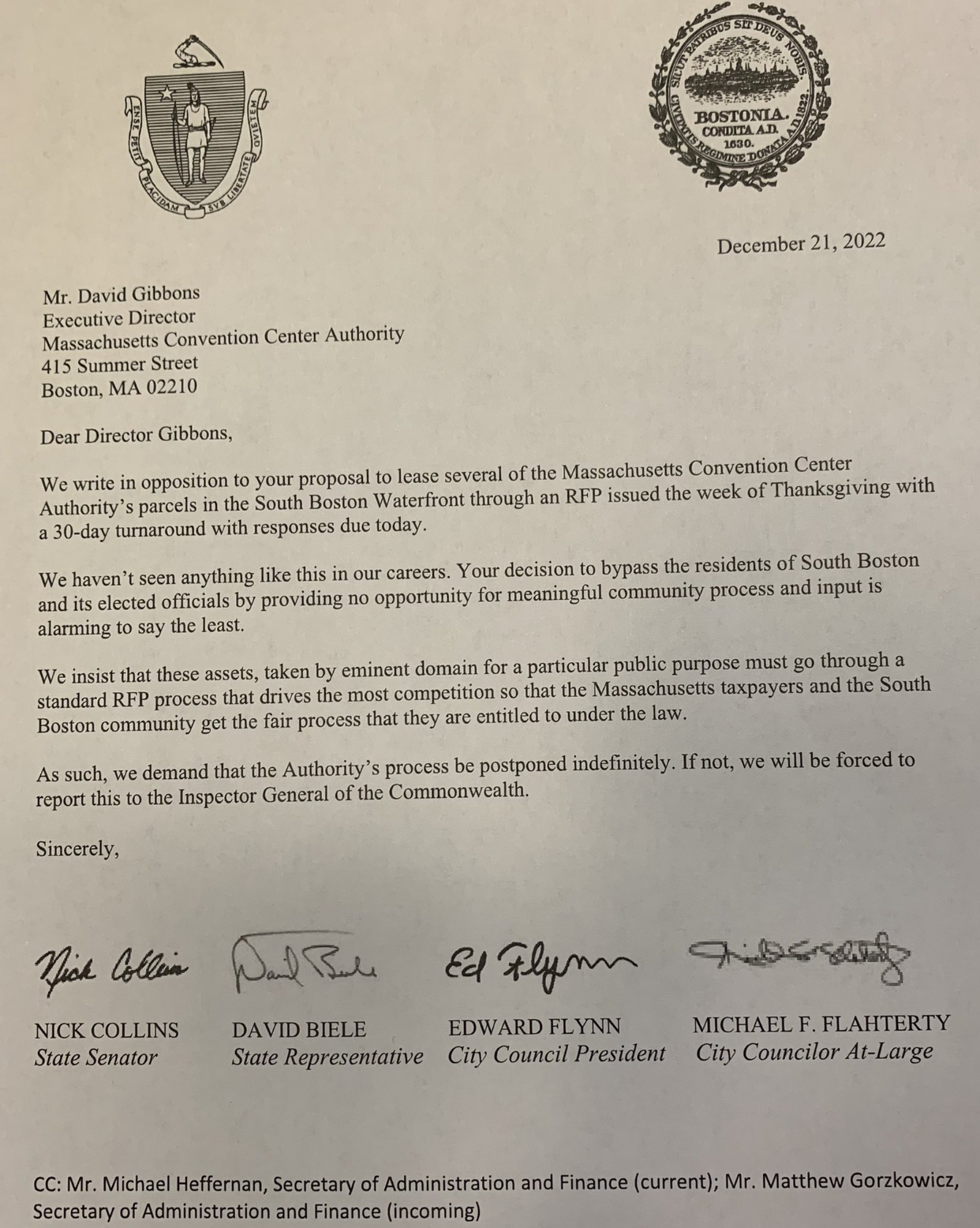 So we shall see. As to what exactly the development will look like or when it will be built, it’s clear that even more changes are coming for the neighborhood….including flying taxis.

You can read the full details of the BBJ article here.