BPDA has recently approved the plans to convert the old St. Vinny’s Church into a six-story building with 35 rental units.

The board has also approved plans for directly across at 363 E Street at the former St. Vincent Rectory.

This project at 363 E Street will construct a new four-story multi-family residential development containing 24 rental units, four of which will be income-restricted. There will be a mix of one, two, and three-bedroom units. As a transit oriented development, this project is in close proximity to public transportation, and will include both interior and exterior bike parking. In addition, the project will support the City’s bikeshare program with a $6,600 contribution. As part of the community benefits, this project will contribute $90,000 to support parks and open space. In addition, this project will provide electric vehicle charginging space, and is designed to meet LEED Gold standards.

Cedarwood Development has filled a letter of intent with the Boston Planning and Development Agency to convert St. Vincent Church – located at 354 E Street into a six-story building with 35 units.  Good news – they will keep the church’s facade.

The project will also include 35 garage parking spaces with an automated lift system, as well as 36 interior resident bike spaces and 16 exterior visitor bike spaces.

Back in January, it was revealed that St. Vincent Church had officially sold to the developers. Father Peter DeFazio, Pastor, St. Monica Parish made an announcement via Facebook:

“A few months ago, we had announced to the South Boston Community the anticipated sale of the St. Vincent de Paul parish property.  I can now share with parishioners and neighbors that the sale of this property to Cedarwood Development was made final on December 30, 2020.  This sale will enable our Catholic community to carry on the rich legacy of St. Vincent’s at our new parish of St. Monica.  We look forward as a people of faith, committed to building a community of compassion.  Specific questions about future plans for the St. Vincent de Paul site should be directed to Cedarwood Development.”

This is not the first church in South Boston to be converted into condos. St. Vincent has been closed since 2015 since the structure was deemed unsafe. It was announced back in August, that the Archdiocese of Boston has decided to put the church up for sale.

Needless to say, some neighbors were less than pleased. The South Boston Neighborhood Development Corporation started a petition for affordable housing to be put in place of the church.

“South Boston does not need more luxury condos. Our community needs homes that are affordable to working families and seniors.”  Unfortunately, it feel upon deaf ears. 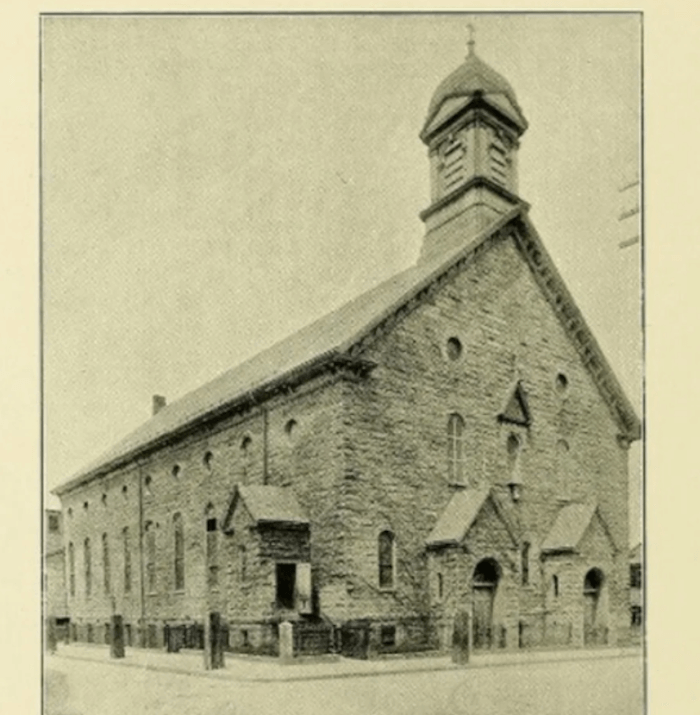 The church’s original home was on the waterfront in a neighborhood once known as Fort Hill (now the Financial District). Initially a Unitarian church, an Irish-Catholic immigrant named Andrew Carney bought the building.  The church was moved “brick by brick” by Irish immigrants to its current location in 1872.  According to the Boston Globe, many parts of the original church, including exterior stones and stained-glass windows, were used to construct the new church at the corner of E and West Third.