EDITOR’S NOTE: The South Boston Allied War Veterans Council has received a grant for $75K to refurbish Kearsarge Memorial in Marine Park. On March 30th, the SBAWVC learned that the Department of Conservation will be matching the CPA funds for this memorial! Great news!  Learn the history of the anchor below!

Read about it below!

We here at Caught in Southie became pretty excited when Christine Poff, Boston’s Community Preservation Director, tweeted earlier in the week about the Kearsarge Memorial in Marine Park.  Could the anchor be getting some needed clean-up/improvements? Fingers crossed that Community Preservation Act (remember the CPA is funded through our tax dollars and can be spent on historic preservation, affordable housing and open space) will be allocated for the memorial’s refurbishment. 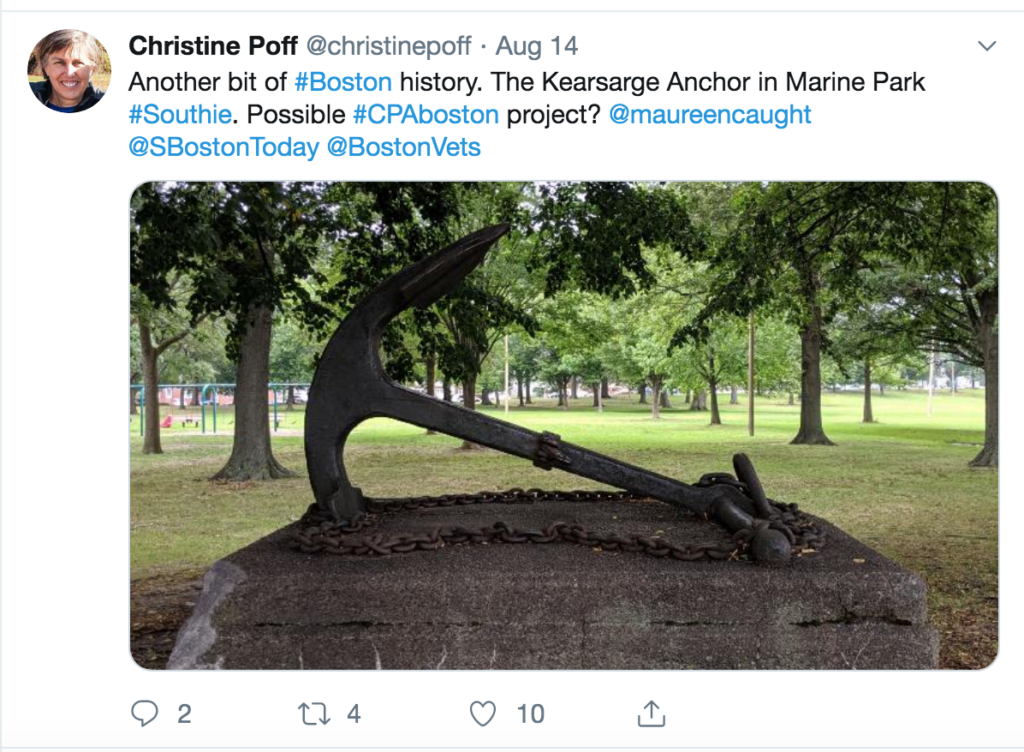 What exactly is the Kearsarge Memorial? What is a Kearsarge? Excellent questions and the subject of this History Lesson!

To begin, we have to go all the way back to the American Civil War (1861-1865). The USS Kearsarge, a steam sloop-of-war, was commissioned on January 24, 1862, at the Portsmouth Navy Yard in New Hampshire. It was named after New Hampshire’s Mount Kearsarge. The USS Kearsarge was deployed to European waters during the Civil War, where it hunted down Confederate raiders and helped to keep the Atlantic safe for the North during the war.  One notable example, the Kearsarge sank the CSS Alabama, the most famous Southern raider ship. The Kearsarge remained in use until 1894 when it sunk on a reef in the Solomon Islands.

The first USS Kearsarge enjoyed such renown that a few things happened. A group of Civil War Navy veterans started an Association that was limited to men from New England who served on ships in the Atlantic during the Civil War. They named their Association after the ship with the most notable Civil War record and created the Kearsarge Association. Eventually the Kearsarge Association of Naval Veterans changed their membership requirements and allowed members to be from any region of the United States and opened membership to veterans of other wars.

The Kearsarge Association of Naval Veterans decided that Boston would be a great location for a memorial dedicated to Navy veterans. On July 19, 1930 the Kearsarge Memorial was unveiled by Boston Mayor James Michael Curley in Marine Park, here in South Boston. Under Mayor Curley’s leadership the City of Boston donated the land for the site of the memorial. The Kearsarge Memorial was dedicated to Naval Veterans of the Civil War, the Spanish War and WWI, (which, at the time, was just called the Great War). A parade, here in Southie, was held for the dedication and the parade’s marshal was David King, who, at 88 years old, was the oldest Navy Vet in the US. More than 1,000 people participated in the parade.

According to the Boston Globe, July 17th, 1930: “The Memorial is in the form of a fouled anchor weighing 1900 pounds, and is set in a cement base. This is the only all-naval memorial in this part of the country, and will be dedicated by the oldest of all naval associations.” Cool, right?

The South Boston Naval Annex was opened in 1920. The South Boston Naval Annex, a 167-acre site on the waterfront, was operated by the United States Navy from 1920 until 1974. The City of Boston then bought the site and turned it into the Boston Marine Industrial Park which was renamed, in 2016, the Raymond L. Flynn Marine Park, after former Boston mayor, US Ambassador, and Southie native Ray Flynn.

The South Boston Naval Annex was also the home of the anchor from the USS Kearsarge (BB-5). In front of the anchor there was a sign that read: “Anchor from Battleship USS Kearsage cast in 1900.” There’s speculation that the anchor was moved to Charlestown but as of right now that is unconfirmed. We will update as we find out more!

We here at Caught in Southie want to say good luck and thank you to the Allied War Veterans Council, under the leadership of Commander Dave Falvey; they are the organization has applied for the grant to refurbish this historic monument.