Dave Falvey sits on his couch, his laptop open while his son Connor sleeps in an infant chair. His dog Sophie is curled up next to him as he discusses logistical plans for the big day. The 2019 St. Patrick’s Day Parade is two weeks away and this year it fortuitously falls on March 17th. It’s also the first year since 1995 that the parade in South Boston has stayed out of contentious headlines. In 1995 parade organizers, the Allied War Veterans Council (AWVC) led by John “Wacko” Hurley won a landmark supreme court case to refuse any groups for any reason to march. Since then the parade was linked to controversy in particular with LGBTQ groups- until now.

Today Falvey is working from home while his wife Lindsey – a nurse at Mass General Hospital works her shift. He works a full time job as an Air Force civilian project manager at Hanscom Air Force Base. He also serves in the national guard in the Army and he’s a new dad. As the newest commander of the AWVC, he dedicates about 10 hours a week to the parade. In addition to lining up bands and fundraising, Falvey has been working hard to make this parade inclusive. “We’re more focused on doing right by the community and making decisions based on what should be done, versus what legally can be done,” he says. 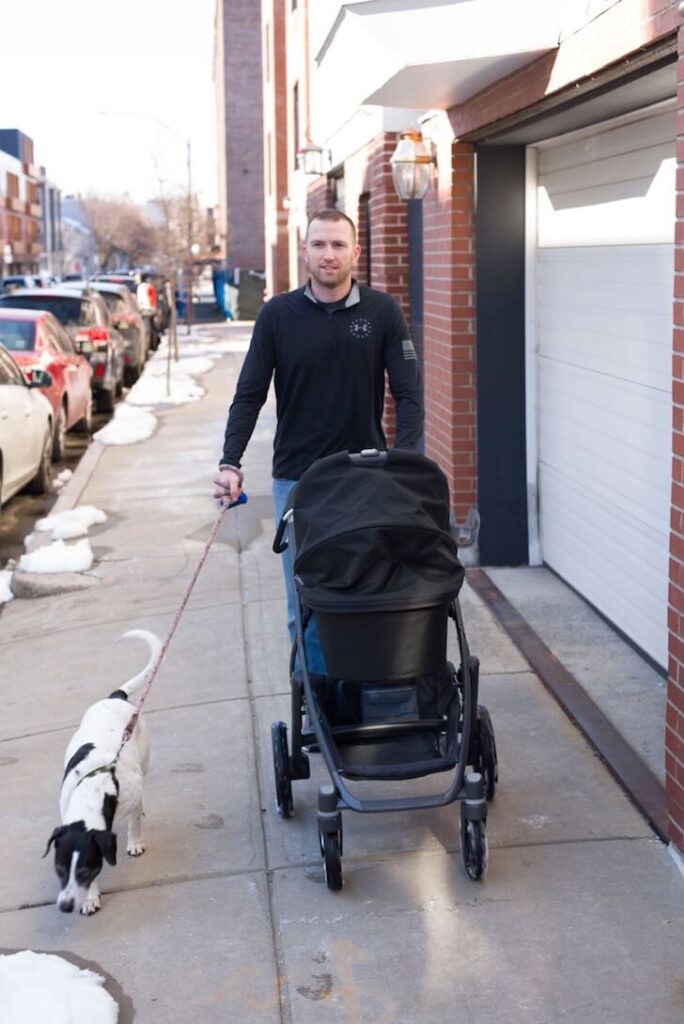 Back in October, the AWVC revealed the 2019 slogan for the parade – For our Heritage. For our Heroes. For our Hometown. “The South Boston parade is meant to commemorate Evacuation Day and honor military service, as well as to celebrate Irish heritage in conjunction with St. Patrick’s Day,” says Falvey. The council was inspired to create a theme. We wanted to show that we are committed, not only to continuing this great annual tradition, but also improving how we run the parade to ensure it’s something South Boston can be proud of,” he adds.

Falvey, wearing a hoodie that reads “Believe in Boston,” pauses when asked about what the most challenging hurdle of organizing this year’s parade. “One of the most challenging things was finding enough volunteers to really commit to giving time to the parade and being accountable,” he says. The task of organizing a parade in which up to a million people can attend and thousands of people participate fell mainly on Falvey’s shoulders with the help of Bryan Bishop – the recently appointed director of parade operations. “Bryan has exceeded expectations. He’s done an amazing job and we’ve become really great friends. We talk on average of five times a day lately,” jokes Falvey.

Bishop, who is helping lead with the coordination of the parade, is the founder and CEO of Outvets – a group that was denied entry in the parade by the AWVC back in 2017. Later that year in November, Falvey was appointed as the new commander of the AWVC. It was the beginning of a new era for the St. Patrick’s Day Parade in Southie.

In an effort to put the past behind them, under Falvey’s guidance the AWVC extended an invitation to Outvets to march in the 2018 parade in hopes to resolve the decades-old battle with gay organizations. An invitation, that Outvets graciously accepted and proudly marched. Post-parade it was announced Tim Duross – the parade organizer since 2015 (and a parade volunteer for over 20 years) would part ways from the AWVC.

A new job description was developed and vetted through the council. After that, the council searched Boston-wide for individuals willing to devote time and expertise, including engaging with Southie community leaders for suggestions and meeting with prospective candidates. Enter Bishop.

“Bryan eventually emerged as the hands-down best candidate. He reviewed the position description and concurred with his role, and at a meeting between Bryan, Senior Vice Commander Colin Smith, and myself, we discussed the position in more detail and Bryan’s vision. That meeting validated that Bryan was on the same page with what the council was looking for, and I knew he would be a great fit for the role,” says Falvey. Bishop embraced his new role and rolled up his sleeves and got to work. He recently negotiated a sizable sponsorship for the parade with Amazon.

The AWVC have also organized events centering around the Irish heritage and culture leading up to the parade. Back in February, they hosted March 17th: How Ireland Becomes The World’s Most Celebrated Country for a Day in partnership with the Government of Ireland and Boston College’s Irish Institute. Mike Cronin, author and academic director of Boston College Ireland lectured about the history of St. Patrick’s Day and the impact on US-Irish relations. On March 16th, an Ireland Gaeltacht Experience event will be held at the South Boston Public Library at 12pm. You can learn the Gaelic language, listen to live celtic singing, learn about Galway’s Hooker sailing boats, and boxer Sean Mannion and his biographer Rónán Mac Con Iomaire will be there to chat about Sean’s life captured in the book The Man Who Was Never Knocked Down. There will also be a military focus too. Navy ship, USS Jason Dunham will be arriving at Flynn Cruiseport the week of the parade.

“This year, I feel like we are starting over. We are trying new things. New events. Everything is brand new to us and I’m hoping that the parade will feel new and fresh too,” says Falvey.

In addition to a strong presence of military and first responders, the parade will boast an impressive lineup including: Banda de Gaitas  – world class bagpipers from Spain (yes, Spain), Woodland String Band – a top-notch band out of Philadelphia, His Majesty’s Tenth Regiment of Foot – a Revolutionary War era British Military unit re-enactment (appropriate given Evacuation Day), American Legion celebrating the centennial anniversary of the American Legion, and Connacht Rugby team – one of the four pro provincial rugby teams in Ireland.

This year there will also be an official ceremony to kick off the parade at Broadway Station.  John Beatty the 2019 St. Patrick’s Day chief marshal, is a Southie native, graduate of West Point and the executive director of the Massachusetts Military Task Force. Beatty will be leading the parade, as part of the “Royal Court” made up of VIPs, local elected officials, Irish government officials, and the Mayor of Southie. The parade will begin at 1pm and march its way through the streets of South Boston leaving the days of controversy behind it.

If you would like to volunteer to help with the parade, Falvey says he would love your help. You can reach out here.