It take s a village

To help raise much-needed immediate funds for furloughed bartenders and restaurant professionals, Ghost Tequila launched the “Ghost Cocktail Challenge” to engage out-of-work bartenders across the country to compete for prizes and cash – all while raising money for the greater industry.

More than 100 bartenders from cities across the U.S. were invited to create a spicy Ghost Tequila cocktail – creatively using ingredients they have at home – and share a home video of themselves preparing and explaining the drink!  People were then invited to vote and for every vote cast, Ghost contributed $1 to Restaurant Workers’ Community Foundation COVID-19 Emergency Relief Fund.  They also invited donations to the organization through Ghost’s GoFundMe page with Ghost matching up to $10,000!  Over 30,000 people voted and almost $50,000 has been raised!

And the winner of the competition is from Boston. Chris Rusk, a West Roxbury resident and bartender at Capo, created the Ghost 2 Go and won $2000 for his concoction! 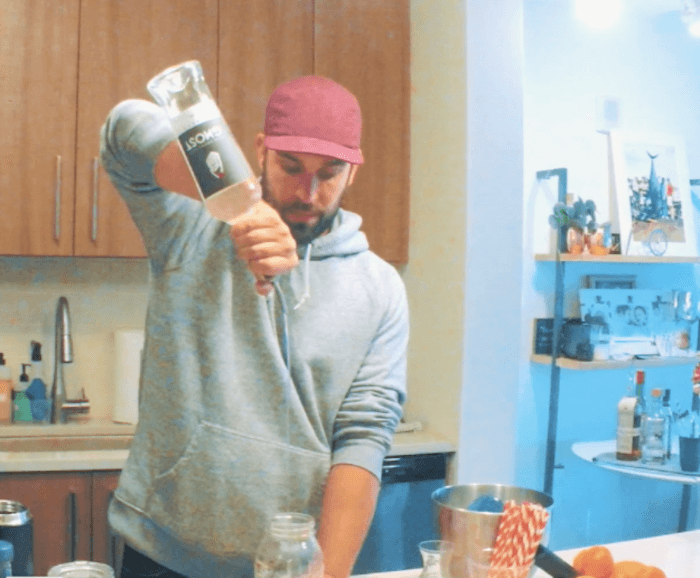 “It’s a traditional margarita (2 oz  tequila. .75 oz agave and .75 oz lime juice) and of course using Ghost as the tequila to give it an extra kick. I batched it in a water bottle to take it outside so I could have a drink while getting some fresh air during quarantine. I wanted to use the simple recipe so I could make the visuals flashy/fluid so the audience didn’t have to keep up with complex ingredients,” said Rusk.

Here’s his recipe below:

Build in a thermos or insulated water bottle (“to keep your margarita cool while outdoors!”)

Here’s Rusk in action below: