Brian Walshe has been formally charged with the murder of his wife, Ana Walshe. He was arraigned Wednesday morning at Quincy District Court. He faces charges of assault with intent to murder and disinterring her body.

According to the Boston Herald, Walshe conducted internet searches on subjects including how long it takes for a body to smell; 10 ways to dispose of a body if you really need to; how to stop a body from decomposing; what does formaldehyde do? How long does DNA last?

Walshe did the searches on his son’s Ipad.  Walshe has pleaded not guilty to the charges.

The affidavits and arrest warrants supporting these charges have been impounded by an order of the court. More to follow.

Brian Walshe will be charged with the murder of his wife, Ana, on Tuesday.

According to the Boston Herald, Norfolk District Attorney Michael Morrissey released a video announcement of the murder warrant against Brian Walshe.  In the video, Morrissey states that Walsh will be taken to Quincy District Court to be arraigned on the new charge on Wednesday morning.

Morrissey, the former state senator, said in the minute-long video that Walshe is being taken to Quincy District Court for arraignment on the new charge of murder.

This means authorities have decided that Ana Walshe is dead, as has been feared but up until this point unconfirmed.

Police headed north on Monday night to search Peabody and Swampscott in dumpsters in those neighborhoods. “A number of items” have been recovered Norfolk District Attorney Michael Morrissey’s office announced on Tuesday. 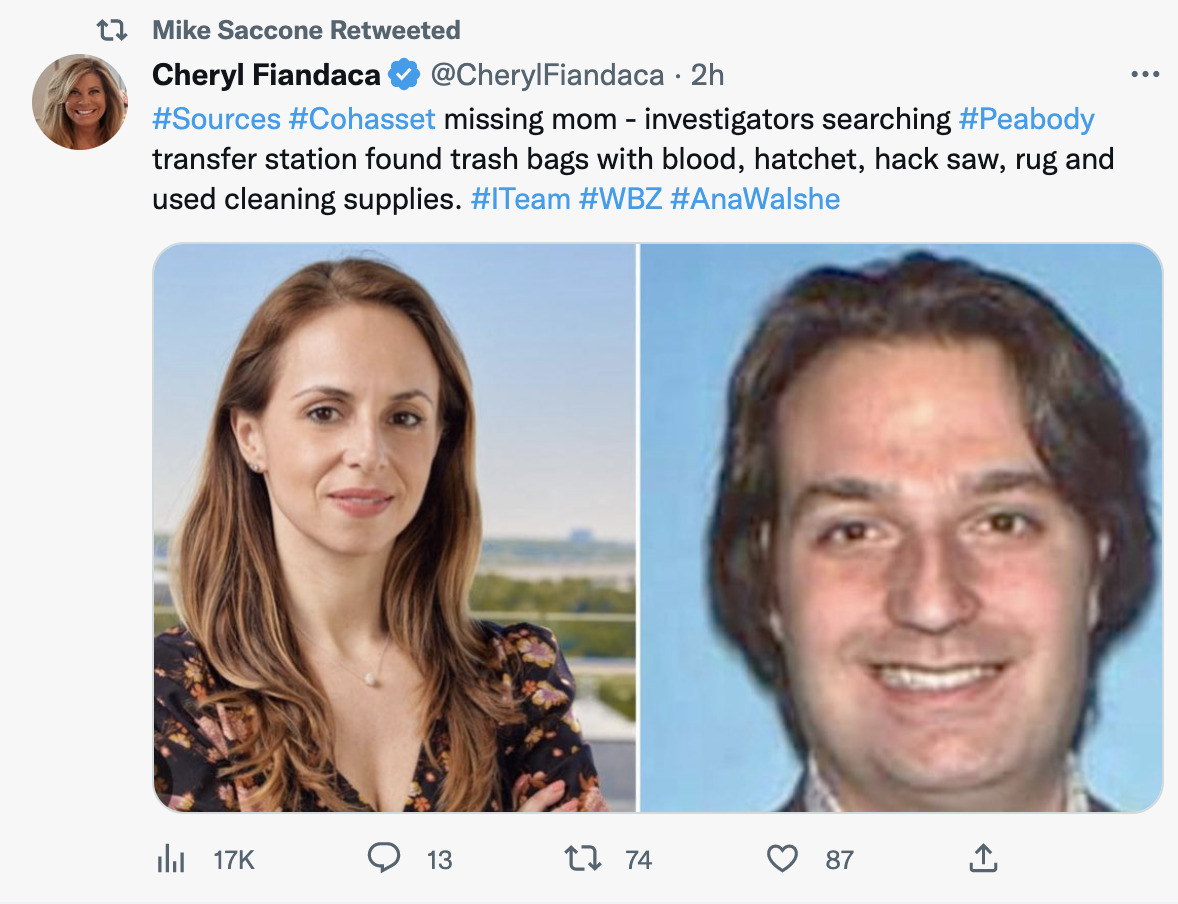 These items will undergo forensic testing to determine the significance they have in relation to the ongoing investigation.  Police searched the neighborhoods of Peabody and Swampscott due to the fact that Brian Walsh said he drove his mother to the North Shore on Sunday.

As of Tuesday morning, Walshe has not been charged in her death, and according to Morrissey’s office, no changes to charges are expected Tuesday.

Brian Walshe, 47, husband of the missing woman Ana, was held on $500,000 bail on a charge of misleading police. Walshe appeared in Quincy District Court on Monday and has pleaded not guilty to this charge. Police say Brian Walshe misled officers about going to Home Depot to buy $450 of cleaning supplies the day after she vanished.

According to the Boston Herald, police found blood and a knife in the basement Ana Walshe’s home.

Ana Walshe, a 39-year-old mother of three is still missing.  According to Brian Walshe, on Jan. 1, his wife left early for a flight down to Washington, D.C., for work and never returned. In court it was revealed that there were no records of a ride share to the airport and her plane ticket went unused.

You can read the full details of this case here. 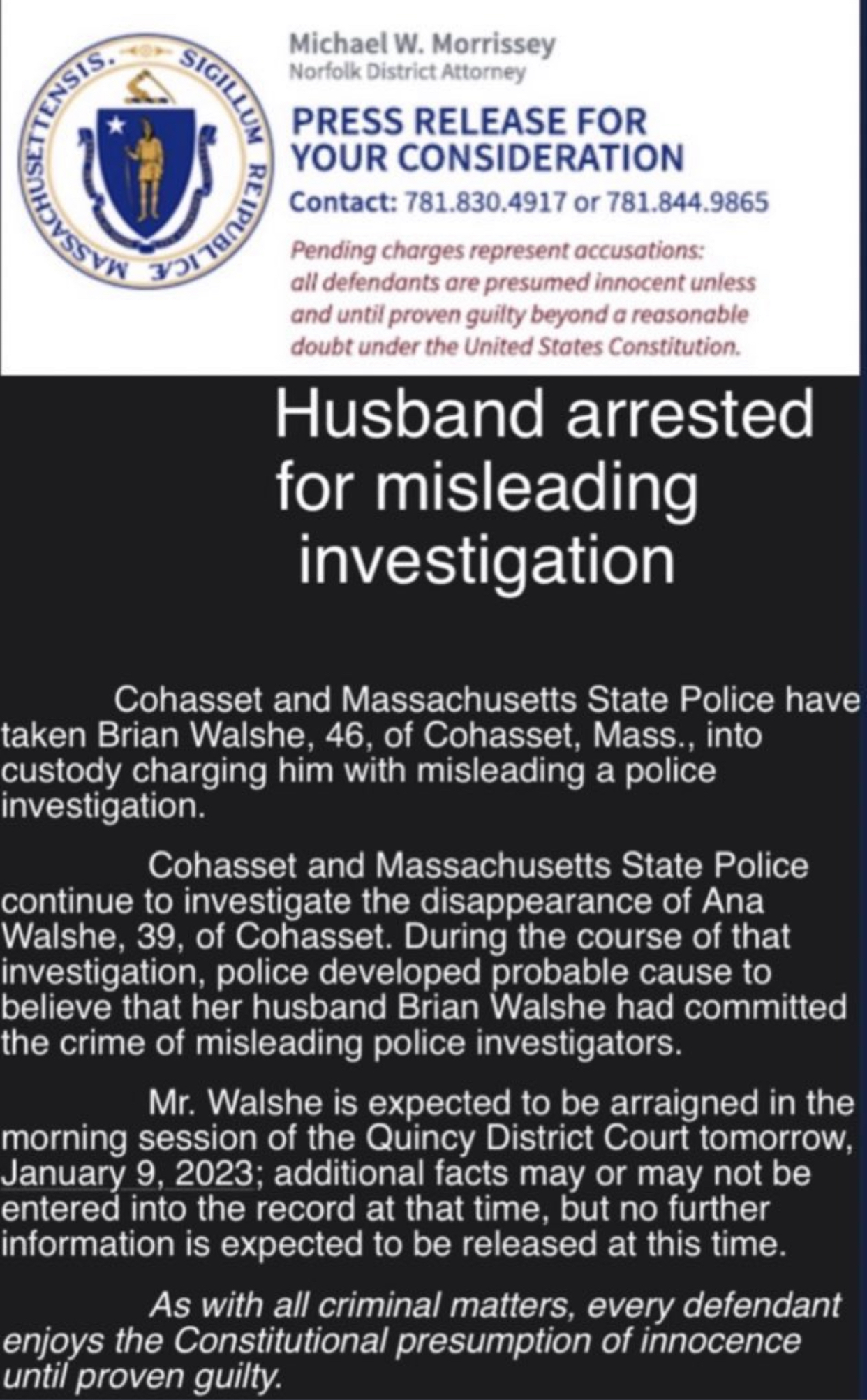 The ground search by Massachusetts State Troopers and Cohasset Police Officers for Ana Walshe or evidence related to her disappearance is concluding. Twenty Troopers from the MSP Special Emergency Response Team, a specialized unit trained in search and rescue operations, as well as three K9 teams and the State Police Air Wing searched wooded areas near Ms. Walshe’s home with negative results for the second straight day. State Police divers also searched a small stream and a pool with negative results.

Regarding yesterday’s fire at Ms. Walsh’s former house on Jerusalem Road, the State Police Fire and Explosives Investigation Unit and local investigators have determined that the cause of the fire was accidental. 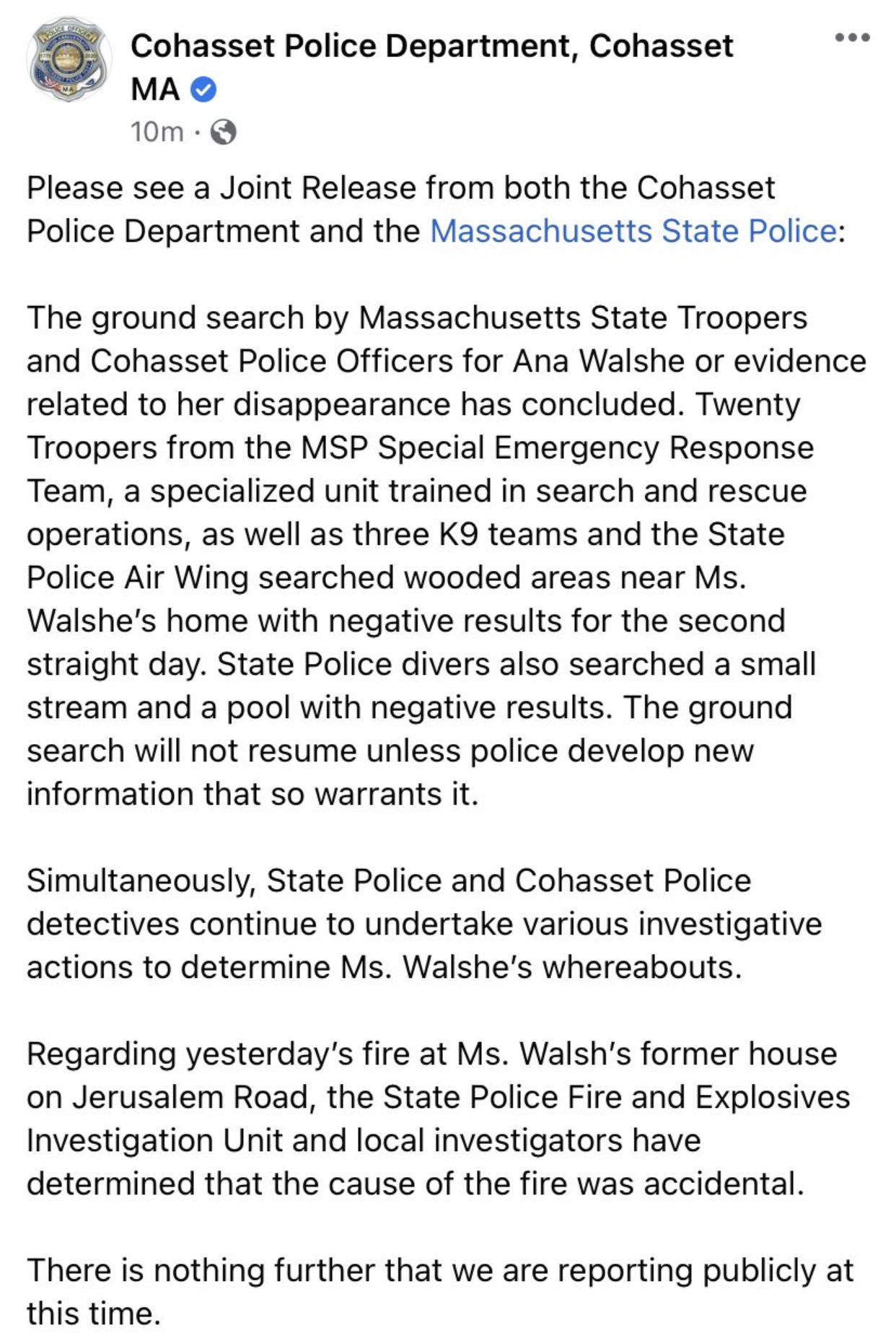