Saving the Honey Locust Trees of A Street

When part of a proposed plan to develop a 6.5 acre project was revealed to remove 39 honey locust trees from a parking lot on A Street, some Fort Point neighbors rallied together on a mission to try and save them.

Developer Related Beal is scheduled to redevelop a large-scale project known as Channelside—complete with three new buildings – two commercial and one residential.  It will be located at 244-284 A St. which is currently a large parking lot. 39 honey locust trees are literally on the chopping block  – with a plan to  remove them to make way for the development.

“The trees are perfectly healthy and quite beautiful,” said Rocco Giuliano,  one of the Fort Point residents who is helping with the save the trees mission.  He also added that one of the 39 trees, the oldest and largest, has been recently destroyed by utility work.

Giuliano has been a resident of the 249 A Street Artists Cooperative since 2005. Residents of this residential artist community have been the most vocal about not only the trees – but also a much larger issue – a large scale luxury development in their neighborhood. Their building overlooks the parking lot in question. 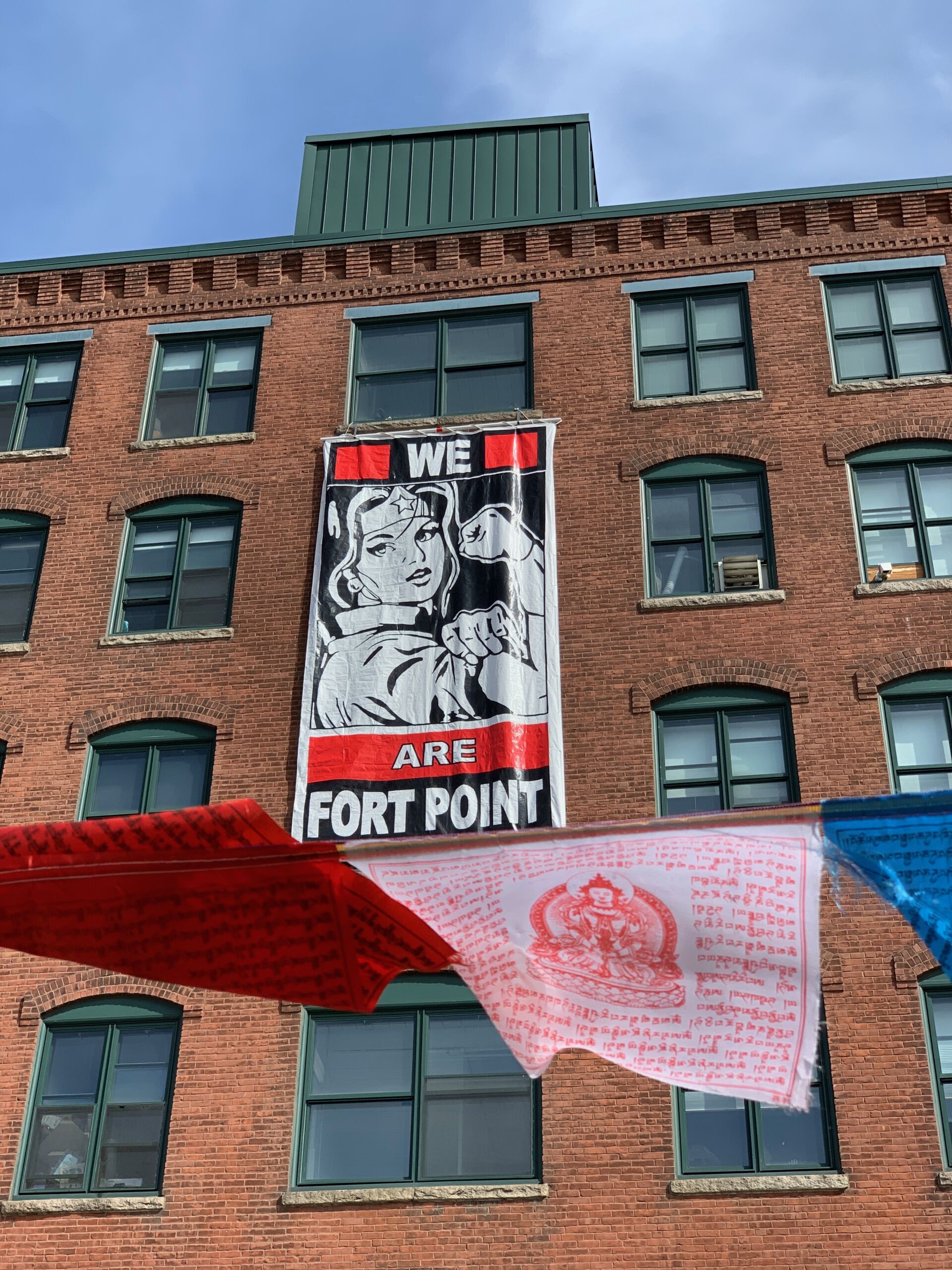 According to an article in the The Boston Globe, the artist residents have turned their anti-development movement into a public art installation via two large banners reading “We are Fort Point” and “Not Another Seaport”.

The size and design of the buildings are what is causing the concern and residents are afraid the luxury development could ultimately change the fabric of Fort Point forever.  They want “to retain the quirkiness of the brick-and-beam neighborhood.” 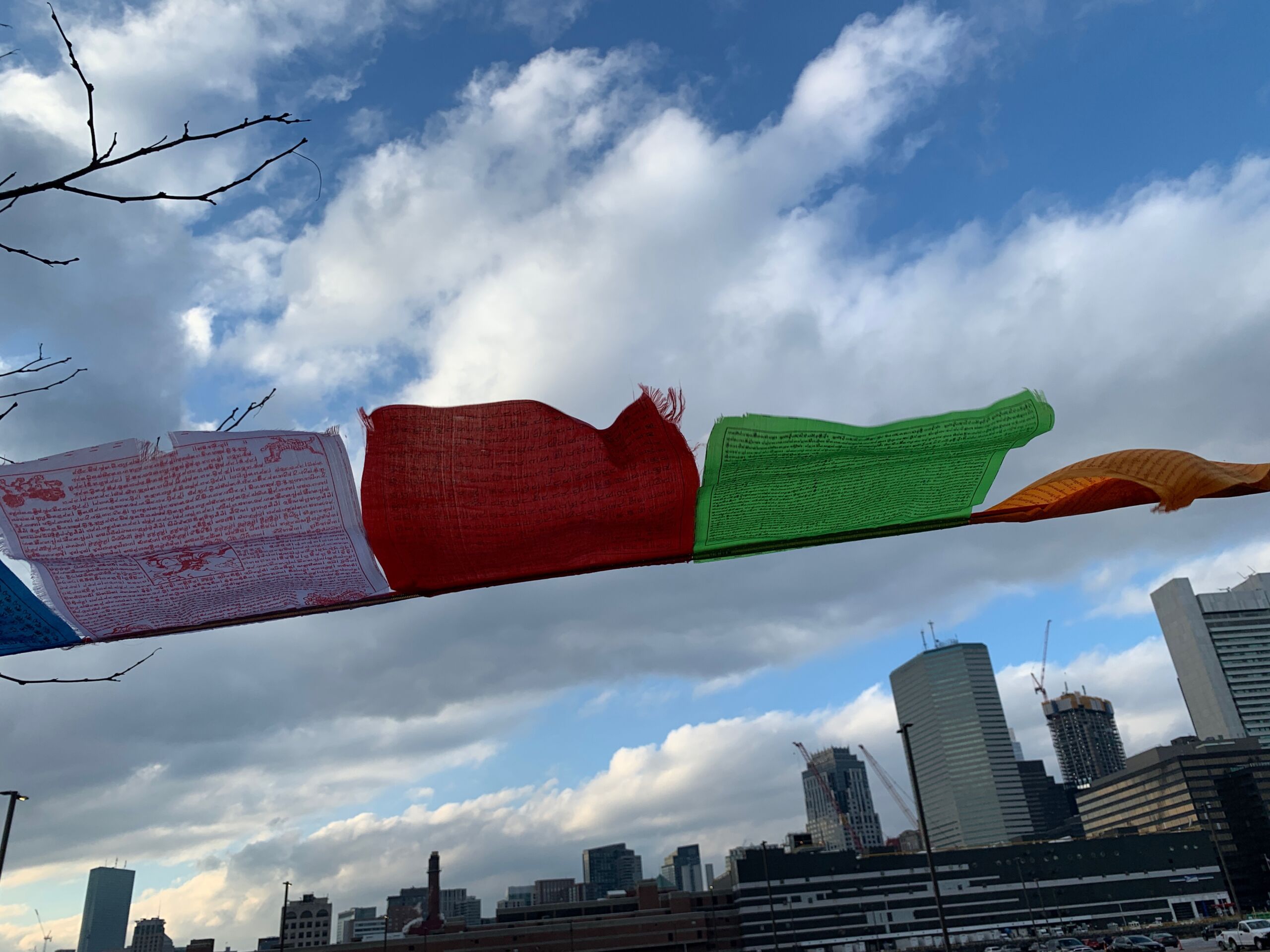 Adding to the anti-development public art installation in that neighborhood is a colorful string of Tibetan Buddhist prayer flags tied to the trees by resident Phil Manna. Manna, a former science teacher, also created and hung signs stating the importance of trees to the environment like, I capture 1,000 gallons of rainwater each year, Kids living in places with more trees have a lower chance of asthma and the very powerful, Let me Live. 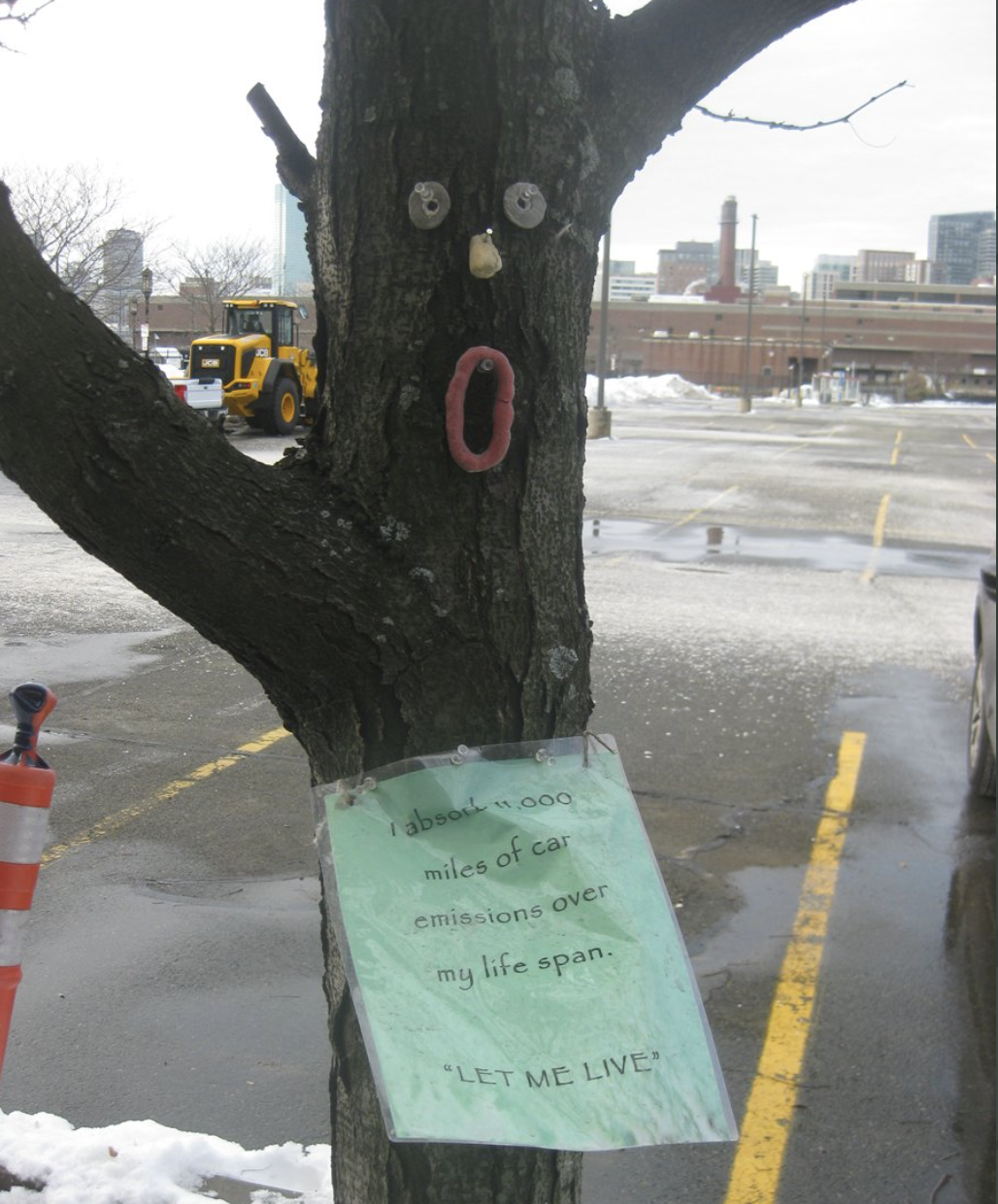 Some of the trees have even been given “faces” with eyes and mouths by residents.

“The many signs I posted are an attempt  to help passerbys better understand their value to us all.  According to data collected by the University of Vermont,  tree canopy in South Boston is the third lowest of all Boston neighborhoods. Trees can also help cities adapt to the effects of climate change,” said Manna.

Giuliano and Manna are working together to raise awareness of the situation with the ultimate goal of saving the trees.  A goal, that many might call “lofty” considering the power of developers in the neighborhoods.

Landscape developer Robert Adams of Halvorson Design, working with Related Beal, is not thrilled with the idea that any trees have to be removed but has stated that project will repopulate 150+ trees with a net gain of roughly 100 trees.

As to whether the trees can be left in their spots (which is about 2 feet in on the perimeter of the property line), Related executive vice president Stephen Faber told Giuliano via email that “our experts have reviewed the viability of transplanting and concluded it is such a low probability of success that it is not appropriate.” Faber also stated, “we will be adding literally dozens of trees on the site, to the streets, parks, and other open spaces.”

Channelside is still in the planning phase and under review by the Boston Planning and Development Agency. The public comment period is officially over and neighborhood residents have written letters in opposition.  So now, the waiting starts to see if this project is approved by the city or not.

When asked what would ultimately make the neighborhood happy, Giuliano said, “It would make me happy if they scrapped or redesigned their project in line with existing zoning.  But I would consider it the first sign that the developer is listening to the community, if they spare the remaining 38 honey locust trees.”

As to the developer’s proposed landscaping, including the promise of 150+ trees, Giuliano added, “We have no faith in their artist renditions of future lush greenery.”