Deja vu all over again

Yvette McGrath, a resident who helped organize the meeting spoke about the dangers of this intersection and made some recommendations and solutions including eliminating N Street as a cut-through from Day Blvd, 4-way stop signs, and raised sidewalks.

Amy from Boston Transportation Department stated that all of those suggestions are being considered for that intersection.  In the near future, lines painted and flex posts will be installed soon.

Sgt. Steve McNeil from BPD C-6 spoke about enforcement and the investigation into the death of Elvis Marte who was killed at the intersection last Saturday. Marte was driving a motorbike up Broadway heading towards Castle Island when he was struck by a car coming up N from Day Blvd.

Jessica Pena, Marte’s girlfriend, spoke next.  She asked for answers about the specifics of the crash. She wants witnesses to speak up and feels as though not enough is being done to get answers. Unfortunately, the camera at this intersection does not work. There was a large crowd or Marte’s friends and family in attendance holding signs asking for justice for Marte. During the meeting they gathered across the street and then eventually in the spot where Marte died. 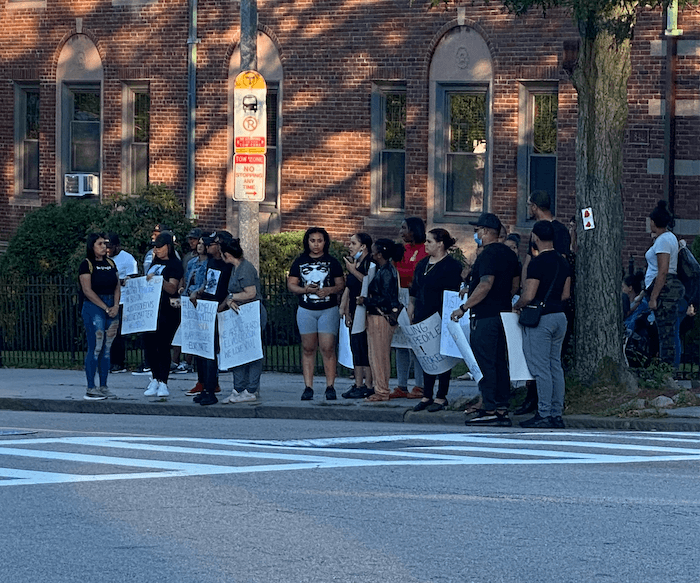 Then people from the crowd spoke.  Suggestions and solutions recommended ranged from making N Street a one-way the opposite way, adding Stop signs, restricting side streets being used as cut-throughs like I Street. In addition to infrastructure improvements, the topic of police enforcement was brought up over and over again.  Tickets need to be given for traffic enforcement but unfortunately BPD does not have the resources to effectively implement this.

The topic then switched to the fact that BPD needs more funding to keep the neighborhood safe. A person in the crowd then heckled candidate Michelle Wu about “defunding” police.

Sloane McGrath, – along with her dad Brendan – were in attendance.  Sloane held a small white board she wrote reading “Important words: cars, traffic, accidents, roads, be careful, walk, look, pay attention, watch where you are going.”  Sloane is the sister of Colin McGrath who was killed at the intersection of L + 6th back in 2018.

The meeting lasted just over an hour.  So what’s next? Well, it sounds like some changes will be coming to N and Broadway i.e. painted lines and flex posts, and a traffic study will be implemented. This area of the neighborhood is very busy.  South Boston Catholic Academy and St. Brigid Church is in this area and there are many families and residents using M Street Park.

This past Saturday, there were two public safety incidents on N Street. One during the day at the corner of N and Fourth when a pedestrian was struck by a car.  The second one was later in the day involving a deadly collision of a motorbike and a vehicle at N and Broadway.

With a new South Boston Catholic Academy Pre-School opening at N and Fourth (in the old St. Brigid Convent) in the fall with over 120 students in attendance, residents are pleading to see traffic and pedestrian safety measures put into place before September.

N Street isn’t the only problem area for traffic/pedestrian safety issues in the neighborhood.  L + 6th, Farragut Road, Summer Street and Day Blvd. have all had serious incidents involving speeding cars and or distracted drivers – and sadly incidents resulting in death.

The following was requested from South Boston Families For Safe Streets and Sidewalks back in 2018.  You are encouraged to reach out to our local elected officials for change

OUR COMMUNITY DESERVES THE FOLLOWING MEASURES BE UNDERTAKEN:

We are joining together to DEMAND action to make our streets and sidewalks safe.

For a list of city councilors phone numbers, you can visit here!