On Tuesday, Mayor Michelle Wu will host a press conference to address this year’s program for outdoor dining in Boston’s North End. She will be joined by State Representative Aaron Michlewitz, State Senator and City Councilor Lydia Edwards, and North End restaurant owners and residents. The avail will be streamed on boston.gov

As the rest of the neighborhoods in the City of Boston gear up for outdoor dining to begin on April 1st free of charge, restaurants in the North End are battling with Mayor Michelle Wu over a $7500 fee.

According to the Boston Herald, On March 17th, John Romano, the city’s North End neighborhood liaison, laid out plans for outdoor dining that would include a $7500 fee to opt into the program, one-way traffic on Hanover Street and a schedule that’s slightly different with a May 1st start and end date of September, rather than December, when other neighborhoods’ restaurants stop.

Needless to say, North End restaurant owners are less than pleased.  Some have threatened to sue the City of Boston is the current rules stand.

Mayor Wu issued the following letter on Friday basically stating if they can’t come to an agreement, the city will rescind outdoor dining completely in the North End. 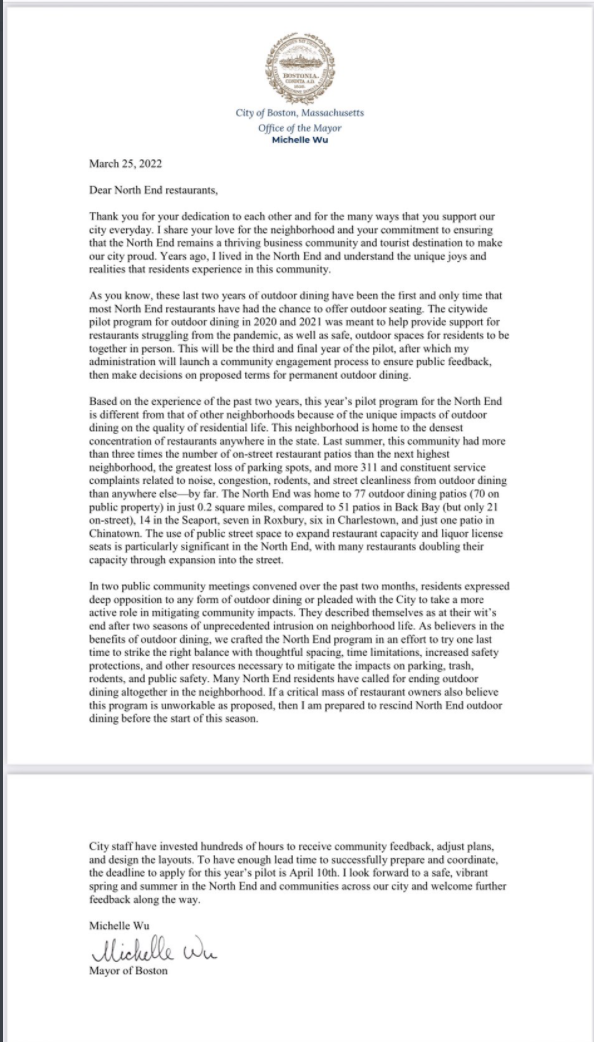 So what exactly is the fee for?

The funds collected will be used to help offset issues ranging from trash displacement and rodents to traffic jams. After numerous complaints and concerns by residents of the North End neighborhood, the amount reflects costs determined by officials in response to these concerns.  The money generated by the one-time charge will be spent solely on programs for the North End neighborhood.

In addition to the $7500, restaurants in the North End restaurants will be charged $458 per month for each parking spot used in their outdoor dining areas.

Currently, the North End neighborhood is the only neighborhood who will be charged with fees. The rest of the neighborhoods in the city  get to operate outdoor dining for free.

What do you think?