Despite opposition, it was revealed on Tuesday, the Boston Planning and Development Agency (BPDA) will move forward with a controversial section of the Boston Zoning Code that could potentially change the landscape of residential development in South Boston.  Less than a day after a heated community meeting on the issue, a BPDA official announced that Article 68 will take effect at the end of next month without incorporating important feedback from residents and elected officials.

The BPDA board will formally vote on Thursday, September 12th at 3:30pm to bring the BPDA plan before the Boston Zoning Commission in October.

Back in 2015 the BPDA began a public process known as the South Boston Rezoning Initiative. The goal was to update the insufficient zoning process in South Boston which resulted in numerous variance requests by reviewing and recommending changes to current zoning code while respecting the historic character of the neighborhood while balancing residential growth with over-development. From this initiative came Article 68.

Article 68 expanded to all of South Boston with the intention of stopping systemized new development rules that would be fair to neighborhood residents, property owners, and developers. The new zoning hoped to level the development playing field by standardizing the rules to allow for reasonable growth, while at the same time eliminating the need to resort to variances and the unpredictability of the zoning appeal process.

Article 68 basically eliminated minimum lot size requirements and replaced previously existing low-density use restrictions with a single all-encompassing 4+ multi-family district. And here’s the loophole – large lots, where development had been limited by use or minimum lot size requirements, can now become the sites for development projects that don’t really fit in the neighborhood. For example, remember the house on M Street?

Which bring us to, the definition of IPOD

The South Boston Interim Planning Overlay District is intended to advance the City’s housing-creation goals within a zoning code framework respectful of the day-to-day living conditions of South Boston residents who have been significantly impacted by a period of unprecedented neighborhood development, residential expansion, and growing traffic congestion.

From the house on M Street example, City Councilor At-Large Michael Flaherty urged the Boston Planning and Development Agency to create an IPOD –“in order to subject certain higher unit count proposed projects to increased public review, while the BPDA staff assesses the strengths and weaknesses of Article 68 as implemented.” Sort of like a neighborhood watch dog.

So how did we get from the IPOD watching out for the neighborhood to the BPDA pushing forward with Article 68 without revisions?

On Wednesday, August 28th, Congressman Stephen Lynch, City Councilor At-Large Michael Flaherty, City Councilor Ed Flynn, State Senator Nick Collins, and State Representative David Biele wrote a letter to the BPDA asking for Article 68 to include 3F zoning (zoning for 3 Family Residential Housing) instead of the current Multi-Family Residential (MFR 4+ units).  MFR zoning blankets most of South Boston and developments over three units can proceed as of right with heights up to 40 feet, if the development meets the rest of the zoning code.  Other neighborhoods in the city include 3F zoning, like Dorchester, Mattapan, Charlestown, Brighton – to name a few. (See letter at end of post.)

There were two community meetings to discuss the IPOD deadline, Article 68 and how it impacts the neighborhood. The first neighborhood meeting was held at the Condon School on Thursday, September 5th. (Side note: The only notification of this meeting was in the local South Boston papers which came out on the same day – Thursday, September 5th.) About 30 people attended this first meeting.

The second meeting was held on Monday, September 9th at the Tynan School. Over 200 people attended with an overwhelming majority that wanted to see Article 68 changed to include zoning designations for 3F.  (basically echoing the above letter to BPDA from local elected officials.)

Less than 24 hours later, on Tuesday, September 10th at the City Point Neighborhood Association monthly meeting, Mark McGonagle – representative of the BPDA – informed the attendees that the BPDA planned to proceed with Article 68 including the MFR. So basically back where we started.

Okay, so what exactly does that mean?

First, the ZBA works closely with the BPDA for all development in the City of Boston. With the recent news of the bribery scandal in the ZBA, why is the BPDA moving so quickly on Article 68 with clear neighborhood and elected official opposition? What is the rush? What did the BPDA do with the information gathered on Monday night’s meeting?

Conveniently, the BPDA board meeting which will vote on Thursday does not allow for public testimony. 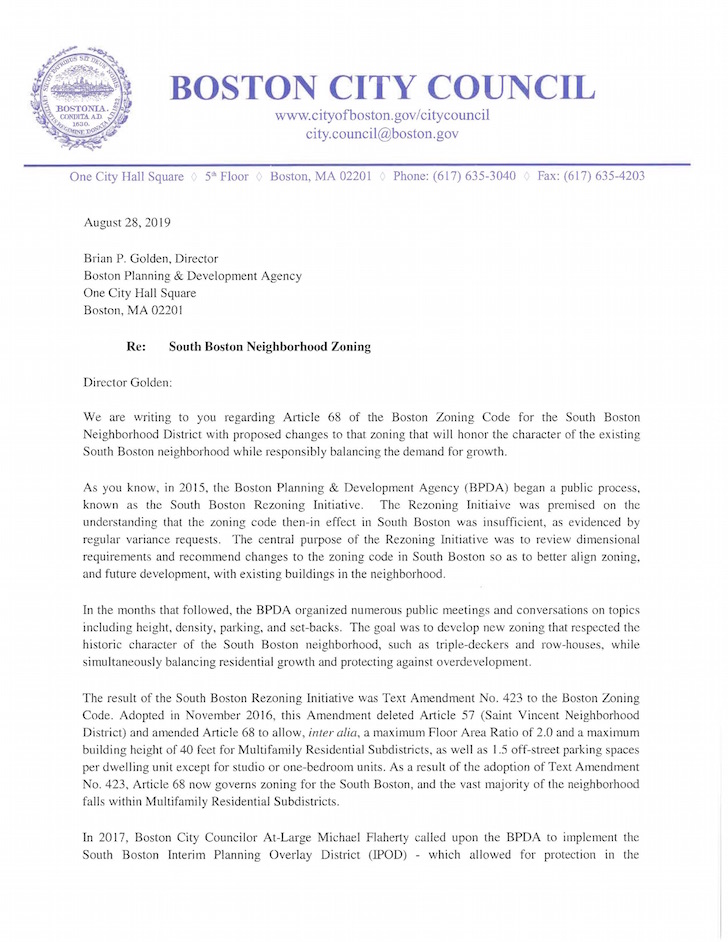 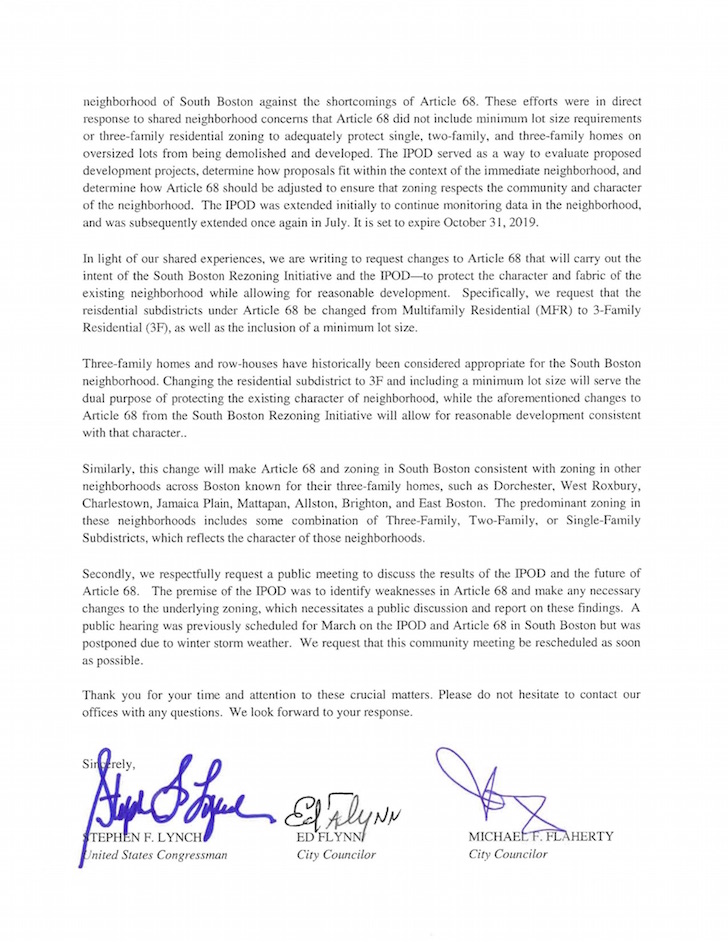