Better Buses Needed on the #7

There is no other bus route in Southie that stirs up as much controversy as the #7. This week twitter erupted with complaints about the dreaded #7.  The line at the L and Broadway bus stop had over 100 people waiting.  Sadly, those people never made it on the next #7 because it was already full.  Week after week, the issues of overcrowding and gridlock traffic on Summer Street top the ticket of complaints. 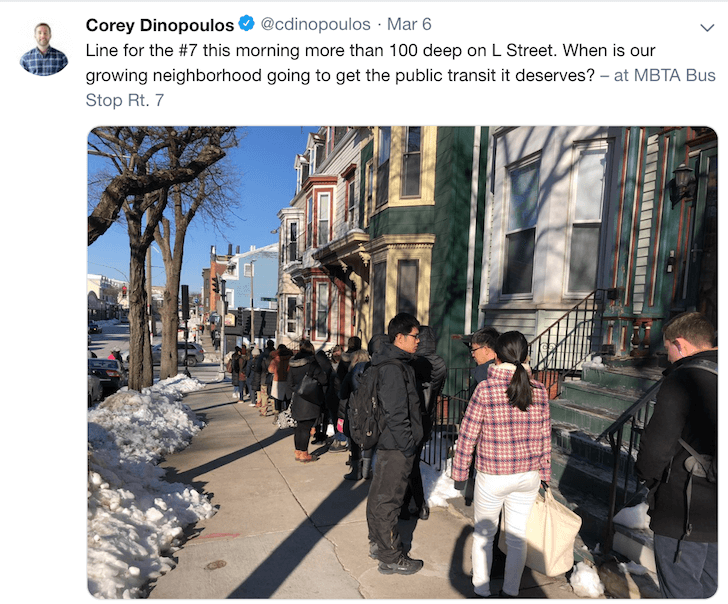 In January, Senator Nick Collins filed several bills to address Southie’s transportation woes including one key piece of legislation to force the MBTA to start a limited stop #7 Express bus route.  The route would leave City Point for South Station bypassing a significant section of Summer Street instead using East and West First Streets and D Street during peak hours.

Way back in 2014, Collins began calling for this express service when he was a state representative,  after 4 years of letters, hearings and meetings requesting this service, no action by the MBTA has been taken on the express service – or really anything at all.  Recently, the MBTA announced they were starting over when it comes to improving bus service in the neighborhood by rolling it into the system-wide bus planning initiative: the Better Buses Program.  In the Better Bus proposal changes are suggested for the #9.  Ironically, the #7 is not included the Better Buses Program.  You can offer your comments and suggestions about the Better Bus Program to the MBTA until Monday, March 11th.

Time for a Dedicated Bus Line?

Some residents are calling for a dedicated bus lane for the #7.  The Boston Globe reported on “bus lane fever” in Friday’s edition.  City officials say they will be testing at least two new bus-only lanes this year after a successful pilot program on Washington Street in Roslindale.  The two new bus-only lanes will be tested in Allston and Charlestown.  Another proposed bus lane is in the works for Blue Hill Avenue in Mattapan.

Should Southie be added into this mix – in particular on L/Summer Street for the #7?  It would mean losing a lane of traffic but that could also discourage commuters from using L Street/Summer Street as a cut-through and help with speeding vehicles too. A pilot program could be worth a try.

What do you think?