You’ve seen the lovable scamps strutting around town, perched on a car, or terrorizing the neighborhood children.  We’re talking about the Southie Turkeys!  Yes, we know.  How odd?  Why on earth would turkeys choose to live in the city?  Well, for one, our neighborhood is the best and this is where all the cool kids live.

Anyway, inspired by the Massachusetts Audubon Society Newsletter this week, we thought we’d share with you some interesting turkey facts about the wild turkeys you see in the neighborhood.

Wild Turkey can stand four feet tall, with a large, bulky body covered with bronzy, iridescent feathers. The tom (male) has a reddish-blue head and a hair-like “beard” protruding from his breast. The smaller female is duller in coloration than the male.

In the spring, tom turkeys make their famous gobble in order to lure in females. Courtship begins when the tom spreads its tail, fluffs out its feathers, swells out the facial wattles, and struts in front of the females. This elaborate dance may be entertaining for us, but the (turkey) ladies love it! Males are polygamous and will mate with several females if given the opportunity. 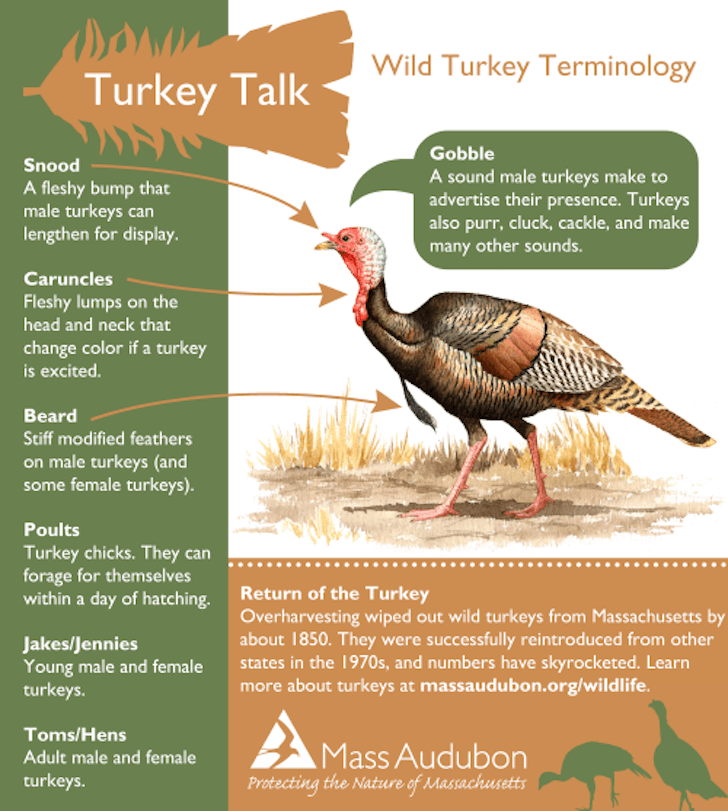 According to the Boston Globe, the Massachusetts Division of Fisheries and Wildlife released some helpful tips if you come face-to-face with these – sometimes mean and aggressive – birds. No one wants a beef with a turkey, right?

Turkeys can act aggressively by pecking, following, or exhibiting other intimidating behavior towards people. More often than not, it’s the male (eye roll) that attempt to attach or dominate by puffing out their feathers or gobbling loudly.

If you are being threatened by a turkey, it’s advised that you use a broom or a hose to scare them off. We’re thinking that might provoke them, but okay give it a whirl. Don’t have a broom or hose handy?  Just act loud and big.   Turkeys tend to dominate people they find as subordinate.

If you have a problem with turkey street toughs hanging around your property, it’s recommended that you try balloons, pinwheels, or Wacky Wavy Inflatable Tube Man. Evidently turkeys hate a celebration and will steer clear.  Actually, it’s because they are afraid of things that are moving around.

And what every you do, never, ever feed the turkeys. The globe article reports that giving turkeys food can lead to aggressive and or bold behavior. “once that is established in the birds, “it can be very difficult to change.” You certainly don’t want turkeys waiting around on your stoop look to be feed and then when you don’t have any food a physical altercation occurs.  Just don’t feed them.  That goes for seagulls too.

You can see the full list of helpful turkey tips here.

You can also listen to our latest episode of Caught Up where we talk Turkey Erotica.