We’ve suspected it for years.  Fort Point is trying to secede from South Boston.  On Wednesday evening the Fort Point neighborhood will reveal its new branding campaign with an installation of 20 new custom banners along Congress, Summer, Melcher and A Streets.  According to the Friends of Fort Point Channel website the purpose of this branding is “for luring more people into the area to explore all the great restaurants, museums and other destinations of Fort Point.”  Not the Southie Waterfront, not South Boston.  South Boston is omitted completley from their branding.

I’m confused as to why Fort Point keeps wanted to separate itself from South Boston not to mention why is the City of Boston allowing them to fly their banners high on city property.  I think it could open a can of worms.  Why can’t City Point or Broadway Village have banners?  What about Thomas Park?  If we have banners, what about our neighbors to the south –  Dorchester? Dorchester has a bunch of neighborhoods within a neighborhood i.e. Savin Hill, Neponset, Uphams Corner etc.   Should they have banners too?

It is true that the Friend of Fort Point Channel did raise private funds for these banners but no one knows how to throw a fundraisers better than Southie.  We can throw a time and raise funds for all the neighborhoods to have their own banners.  Southie will be teeming with banners boasting shields of clans like Game of Thrones.  There will be City Point, Andrew Square, Lower End/West End, St. Vinny’s, Cityside, Thomas Park, Bay View, Waterfront, Fort Point, Innovation District, Old Colony, Old Harbor and D Street. We may even have to get a banner for Midtown in the few years.

Fort Point, we accept that you are a neighborhood with a different feel and vibe just like Andrew Square or the Waterfront or City Point but do you really need to fly a banner to show your “sense of place.” From the Friends of Fort Point Channel website:
The community driven branding process began with a discussion in the Fort Point neighborhood about leveraging the assets of the community, whether the arts community, the tech businesses, the burgeoning restaurant scene or its status as a historic landmark district, to create a brand that would reflect the true nature and “sense of place” that is Fort Point.

Fort Point Channel’s banner is going to be unfurled on A Street.  I mean there’s a stanza in “Southie is My Hometown” that mentions A Street. What about the trendy and wildly popular Lawn on D? Fort Point would love to take ownership in their branding for the Lawn on D – but it’s on D Street and that’s Southie.

We need to stand united in this wave of gentrification and overdevelopment.  To quote Abraham Lincoln, “A house divided against itself cannot stand.”  Fort Point – we will not let you secede.  We will remind you every chance we get that you are Southie.  It’s South Boston – embrace it – and be proud.  We know we are. It’s the best neighborhood in the world!

FYI: Interesting fact.  On the BRA’s website – the neighborhoods of Boston are listed. Fort Point is not listed – it’s is included as part of the SOUTH BOSTON Waterfront. 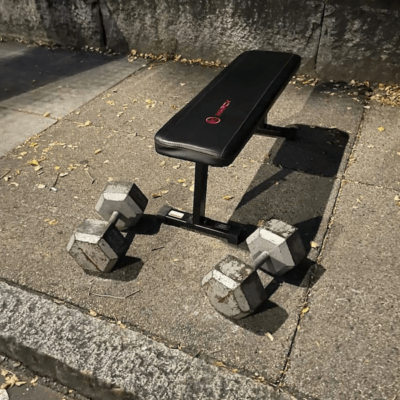 Wait…that’s my bench and dumbbells