Boston History Lesson: Vendome Fire – Greatest loss of life in the history of the BFD

The Hotel Vendome was built as a luxury hotel in 1871 at 160 Commonwealth Ave. In 1972, a large renovation to the building was taking place to convert the hotel into a luxury condos and shop and restaurants. On June 17, 1972 around 2:30pm, a worker noticed a fire between the third and fourth floors and alerted the fire department. According to the Boston Public Library, overall 16 engine companies, 5 ladder companies, 2 aerial towers, and a heavy rescue company responded to the 4-alarm fire. The fire was knocked down by 4:30pm.

“Several crews were at the building doing clean-up at around 5:30pm when the entire southeast corner of the building collapsed without warning, burying 25 firefighters and a ladder truck in a pile of debris. Nine of the firefighters died, making it the greatest loss of life in a single incident in the history of the Boston Fire Department.”

Thousands of firefighters from all over country and Canada came to Boston to pay their respects to the nine men who died in the collapse. Over 10,000 people attended the funeral Mass held at Cathedral of the Holy Cross.

50 years later, on Friday, June 17th, family members of the deceased, firefighters, elected officials and others gathered at a monument on the Commonwealth Avenue Mall that commemorates those who died designed by artists Ted Clausen and Peter White. 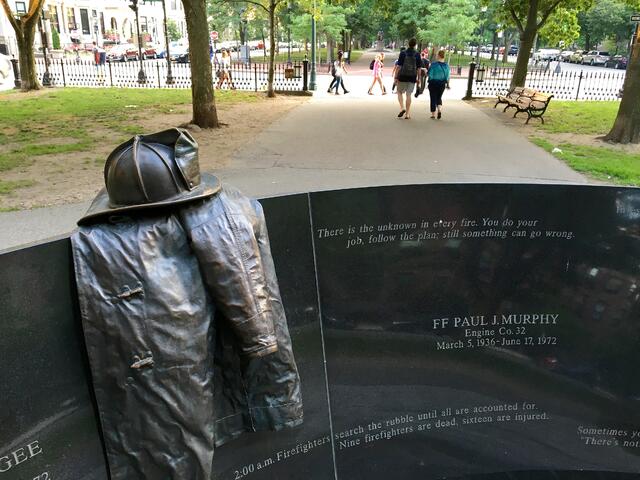 The memorial consists of a simple curved granite base with a bronze sculpture of a firefighter’s helmet and jacket draped over the top. The names of the firefighters who lost their lives are inscribed on the granite base along with a description of events on the day of the fire.

Keep the BFD and their families in your thoughts and prayers. And if you see a firefighter, thank them for their service.

The Boston Globe has a great profile on the Vendome anniversary that you can read here!