The Mary Eliza Project: South Boston Women Voter Registration Data from Back in 1920

Here are Caught in Southie, we love local history lessons! So when Boston City Archives sent us women’s voter data from Boston’s Ward 10 (South Boston) from back in 1920 – we were very excited!

In 1920, after the passage of the 19th Amendment, Boston’s women registered to vote by the thousands. The 1920 Women’s Voter Registers now live at the Boston City Archives and document women’s names, addresses, places of birth, and occupations. Sometimes women provided additional information about their naturalization process to become a US citizen, including where their husbands were born because, in 1920, a woman’s citizenship status was tied to her husband’s nationality.

Named after an African American nurse, civil rights activist, and Boston voter Mary Eliza Mahoney, the Mary Eliza Project transcribes handwritten records into an easily searchable and sortable dataset.  The newest ward to be transcribed is Ward 10, which covers part of South Boston. Here’s the ward map below: 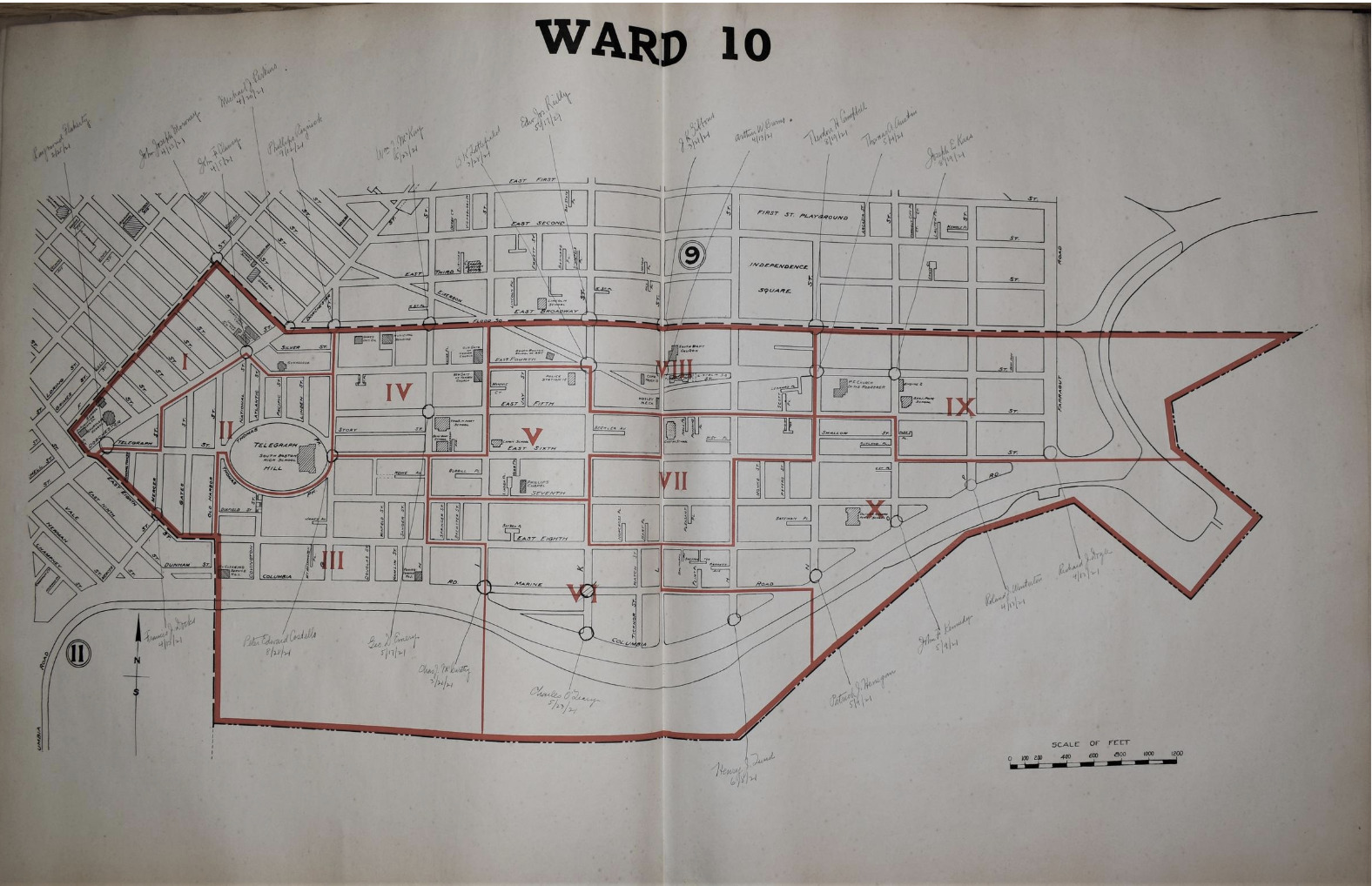 So who were these women?

Most of the women who registered to vote in Ward 10 were born in Massachusetts but it was discovered that there were almost 100 Irish-born women voters. Other women were born in Austria, Germany, Switzerland, Sweden, Belgium, Russia, Canada, and Norway.

The women voter also worked as clerks, housekeepers, stenographers, factory workers, salesladies, probation officers, teachers, bookbinders, machine operators, and more. While some women traveled downtown to work, others worked at local businesses in the neighborhood near their homes, including the Gillette Razor Company factory.  This register shows Augusta Hanouseck and Julia Sullivan’s voter registrations. Both worked at the Gillette factory, and they stood in the voter registration line together. 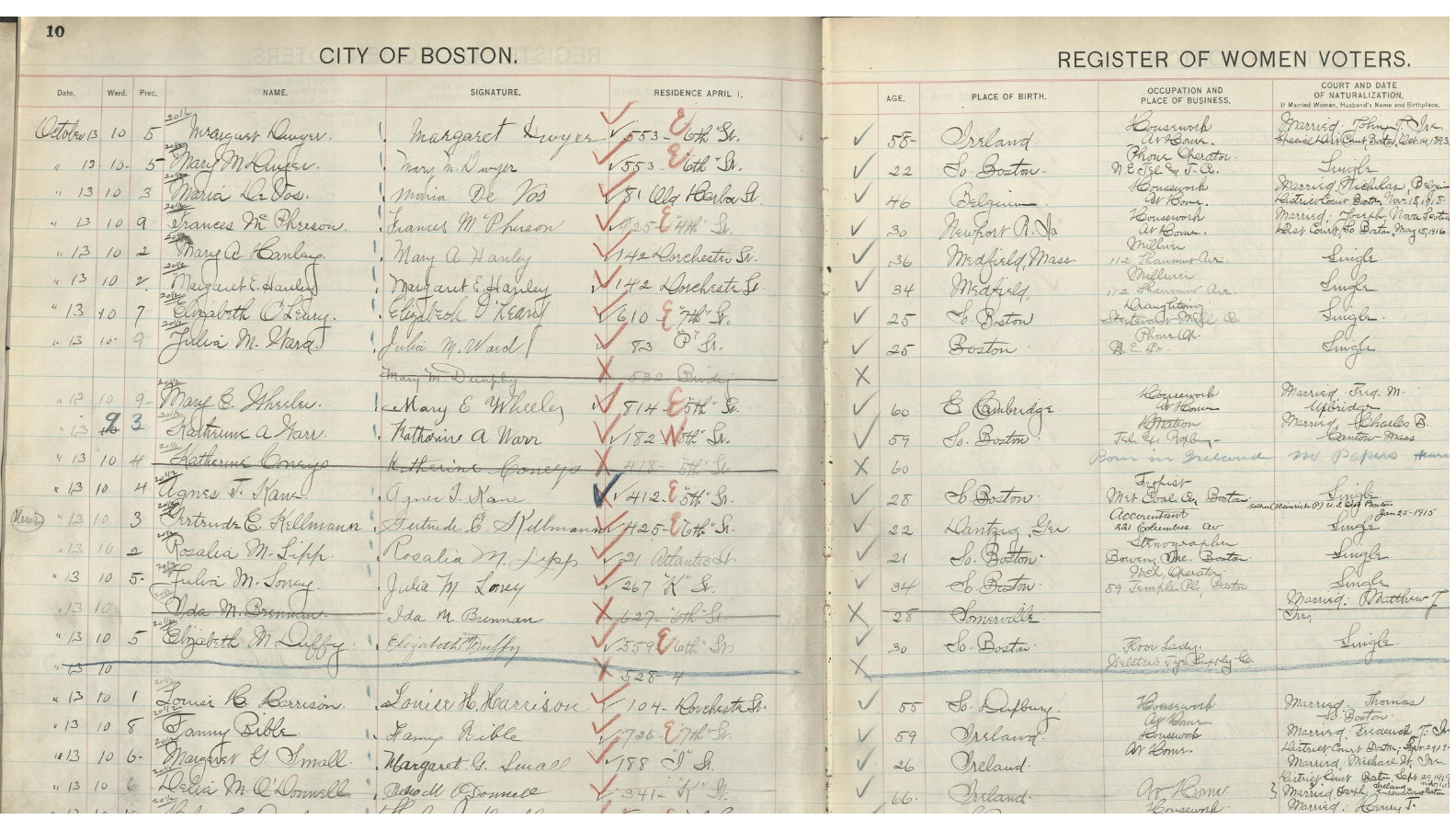 You can explore this newly updated database here!

This dataset is in progress and is updated periodically as additional voter registers are transcribed.

Let’s hear it for all those brave, bold, and badass women who fought for decades to make women’s right to vote a reality!  Massachusetts became the 8th state to ratify the 19th Amendment.

Here are some Boston suffragists who fought for Women’s Right to Vote:

Josephine St. Pierre Ruffin, Boston: A journalist and noted abolitionist before the Civil War, a member of the Massachusetts Woman Suffrage Association in 1875, and American Woman Suffrage Association, and Black woman’s club leader.  She was the wife of George L. Ruffin, one of the woman suffrage representatives from Boston in the state legislature.  In 1895, she convened the first conference of the National Federation of Afro-American Women, probably the first national organization of Black women, in Boston, thereby becoming a leader in the Black woman’s club movement

Lucy Stone, Dorchester: Prominent U.S. orator, abolitionist, and suffragist, and a vocal advocate and organizer promoting rights for women. In 1847, Stone became the first woman from Massachusetts to earn a college degree. You can read more about Lucy Stone here in our Dorchester History Lesson.