A Guide to the State Primary Election Day on Tuesday

The State Primary Election is Tuesday, September 6th – yes, the day after Labor Day! Polls are open 7am-8pm. Wondering where to vote? You can check your polling location here!

Reminder: There are some new polling locations are in place in the City of Boston. The new precinct structure focuses on equity across voting populations in each precinct to reduce wait times and increase access.

What’s on the ballot?

You can check out the democratic ballot here.

Some friendly reminders from the City of Boston for Election Day

On Election Day, printed ballots will be available in English and Spanish, English and Chinese, and English and Vietnamese. All voting locations are handicap accessible and are equipped with AutoMARK Voting Terminals for voters with visual or language disabilities.

The City of Boston held a week of early voting with 19 polling locations across the City. As of Thursday, September 1, 3,645 votes were cast in-person.

After polls close at 8 p.m., the Election Department will receive and upload unofficial results of ballots counted at polling places to the city’s website as they are returned from each precinct. The initial results reported on the website will not include: (i) early voting and mail-in ballots from those specified precincts being centrally tabulated during the day at City Hall; or (ii) mail/absentee ballots that arrive on time on Election Day, but too late to be sent to polling locations to be counted. Mail or absentee ballots that arrive on time at the Election Department, but too late to be sent to polling locations will be counted at City Hall on Election Night, starting after the voting lists from each precinct are returned. Election officials can count a ballot only after it has been confirmed that the voter did not already vote in person at their polling location.

Because poll workers need time to tally election results and transport materials from polling places to City Hall, counting of ballots submitted on time to the Election Department, but too late to be sent to the polls, may not begin until after 10:00 p.m. These ballots will be tallied by precinct and results will be updated on the city’s website periodically, as precincts are completed.

Members of the media are reminded that certain rules must be followed in order to ensure a smooth voting process for voters:

For more information about the State Primary, please visit boston.gov/elections or contact the Boston Election Department at 617-635-8683 or [email protected]. 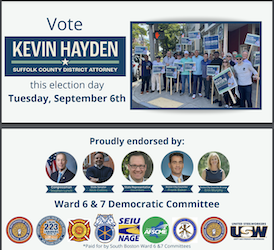