In honor of what would have been Judy Garland’s 100th Birthday, you can see the Wizard of Oz on the big screen for two days only – June 5 and 6!

The film will play in over 800 theaters nationwide on Fathom’s Digital Broadcast Network on Sunday, June 5 at 3:00 pm and 7:00 pm local time and on Monday, June 6 at 3:00 pm and 7:00 pm local time. In addition to the full feature film, fans will be able to enjoy a rarely-seen extended musical number.  In the scene, Ray Bolger (Scarecrow™) performs a dance routine that was cut from the original movie.

Tickets for “The Wizard of Oz: Judy Garland 100 Years Over The Rainbow” are available online at www.fathomevents.com or at participating theater box offices – including South Bay. For a complete list of theater locations and prices, visit the Fathom Events website (theaters and participants are subject to change).

Did you know that the Scarecrow from the Wizard of Oz grew up in Dorchester?

Of course, you did! Bolger was from Codman Square and graduated from Dorchester High School in 1920 before taking on the legendary and iconic role.

Starting off his career in vaudeville, Bolger was known for his dancing and was casted in the Wizard of Oz over 80 years ago and the rest is Hollywood history.

Did you also know there’s a mural of The Scarecrow on the wall at the corner of Dot Ave and St. Mark’s Road? The mural was painted a few years ago by the Mayor’s Mural Crew – a group of young local artists who work with professional painters to design and paint really cool public art around the city! 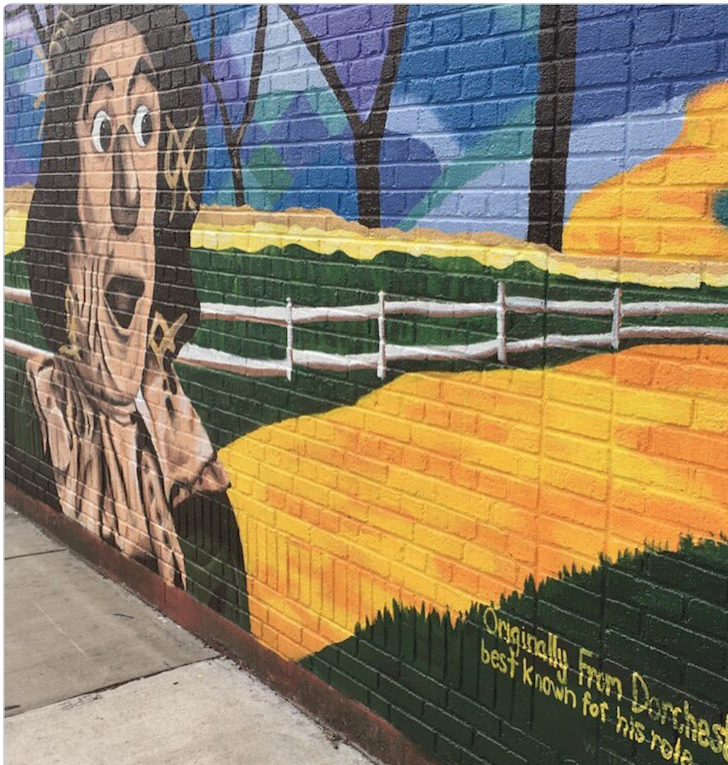 Some more Wizard of Oz trivia

Jack Haley who played The Tin Man was also from Boston. Jerry Maren who played a member of the lollipop guild is from Roxbury. Maren passed away last year and was the oldest surviving Munchkin and was also the last surviving cast member with a speaking or singing role in the Wizard of Oz.

Image of mural via twitter.  Main image via MGM