The King of Layaway – A trip down memory lane

Christmas is upon us, and the memories of days gone by and the purchasing power that I had as a kid through the use of the layaway makes me smile. You have to keep in mind that I was considered “The King of the Layaway” in my family.  I was ten years old, and I wouldn’t wear anything that wasn’t in style.  Jones’ Department Store, located at the corner of K and East Broadway, was my second home. I would walk around the store even when I wasn’t in the market for something new, just to look at all the stuff that I would buy once I got my next buck.

I was a walking advertisement for Jones,’ and I loved it. The only problem was how to pay for it all. My parents (mostly my father) thought clothes from the Quincy Bargain Center were fine for me to wear. I protested their purchases.  We struck a deal, I could buy my own clothes, but I would have to pay for them all myself.  Occasionally, my mother would slip me a couple of bucks every now and then and say, “Don’t tell dad.”  If I didn’t buy my own clothes,  I’d have to wear “Bobo Cons.”  For those who don’t know, Bobo Cons = fake Converse or Nike’s with a backward swoosh, or Adidas with four stripes. I worked hard for my wardrobe  – paper routes, selling papers on the street corner, shining shoes – but it was never enough money to walk out the door with my purchase in hand, so I relied on layaway.

Credit cards weren’t an option for a boy in the 70s and 80s, so I would use layaway. You picked out your purchase, brought it to the register, and they would fill out a card with your personal information and the amount of your down payment and then place your purchase in a bag and hold it hostage until the purchase was completely paid off. Now, Jones’ deserves a story of its own, but let me just give you the basics on the place. First, ALL customers (even 20-30 year customers) were considered potential thieves. Second, all customers were followed by at least one employee once they entered the store. In most instances, many employees descended upon you, including the owner and my “friend” George. Even the dressing rooms weren’t safe from constant surveillance.  The security mirrors were angled so they could see what you were doing – I’m not even sure if that was true – it might have been just a rumor. But regardless, if you were a kid in Southie, you shopped at Jones’.

Jones’ was always on-trend.  They carried everything that was in style, and I mean everything. So every week, I traveled up to K and Broadway and put money down on my latest purchase. An employee would go upstairs to the storage area, bring the bag down, and let me look at my purchase again – which was torture.  They would then subtract the money down from the total and then put it back upstairs. Weeks sometimes months, would go by before I could actually wear my new purchase. I had nightmares of buying something really cool, but by the time I got it out of layaway, it didn’t fit anymore because I had grown.  Jones’ was not the only store with layaway either. I bought my first Claddagh ring at Murphy’s Jewelers by way of layaway.

It wasn’t easy getting what I wanted for my closet.  It took determination to pay off the layaway, but it made the purchase all the more sweeter.  I’m not sure kids these days even know what layaway is.  But I’m thankful for my layaway past.  I learned how to work hard and avoid obstacles (and security measures), and I enjoyed the challenge of it all.

Gino Provenzano is a lifelong resident (fourth-generation South Bostonian) and a sergeant on the Boston Police Department. Provenzano recently received the BCYF Condon Community Center Person of the Year for his dedication to the youth of South Boston!  He’s one of the nicest guys you’ll ever meet.

Gino and I share the same birthday – June 1st, 1969 and grew up together in the neighborhood.  Here’s a photo of us in our kindergarten class photo.  Gino is the last boy on the right in the top row – clearly the teacher’s favorite. 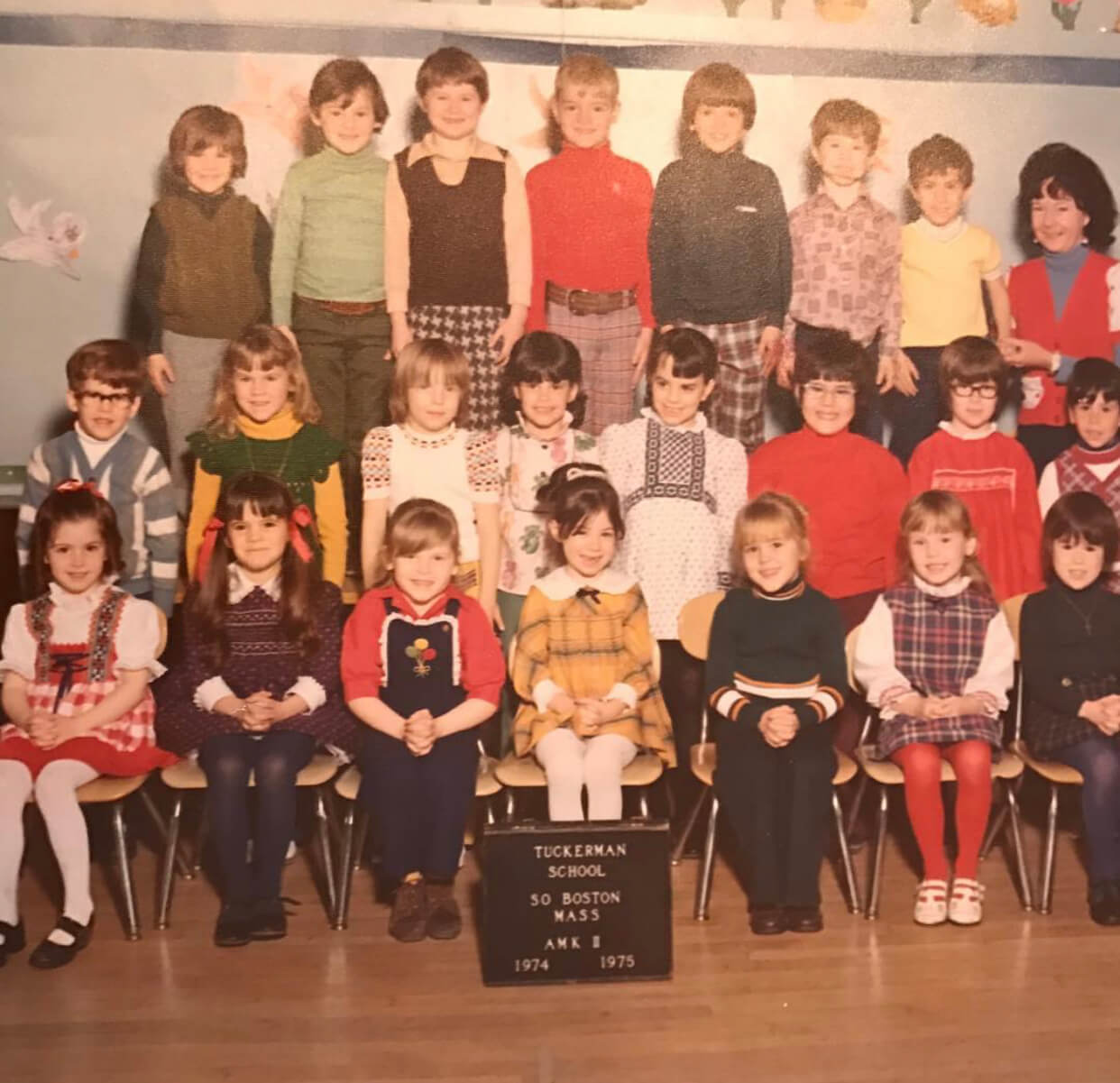 This photo features the 1974-1975 kindergarten class at the Tuckerman School (now condos) on Emerson Street/East Fourth Street. Mrs. Foster was the teacher, and she could have been 38 or 72 years old.  It was the 1970s. Things were fast and loose.  People drank and smoked. No one wore seat belts in cars. It was bologna and cheese on Wonder Bread in your Scooby Doo lunch box.

The girl rocking the dirndl in red and white check (far left in the first row) is me!