Springtime in Southie feels a little different this year, doesn’t it? No nonprofit fundraisers, no  beach days with friends, and no baseball. Sad! Especially, for the kids who wait all winter long for Little League and for the parents who love nothing more than to cheer for their kids.  While we can’t go to Moakley, Evans or N St. to catch a game, we can turn our attention back 100ish years and talk about a young Babe Ruth and Southie. That’s the focus of this Caught in Southie History Lesson!

George Herman Ruth Jr., aka Babe Ruth, was born in Baltimore in 1895 and by July 1914 was traded to the Boston Red Sox, from a minor-league Baltimore team. In 1914 Fenway Park was only two years old! Ruth was an impressive pitcher already and right after arriving in Boston, the 19-year-old met and fell in love with a 16-year-old from Southie, Helen Woodford. Helen Woodford lived on West Fourth St. and worked on Huntington Ave., as a waitress at Landers Coffee Shop. Ruth was immediately taken by Woodford and they dated that summer and into the fall. By mid-October they went to Maryland and got married!

According to Jim Sullivan, in his book “South Boston,” the Woodfords moved to Southie in 1907 from New Hampshire. They first lived at 290 Silver St., then 5 National St., and finally at 420 West Fourth. None of the homes are standing today. After Babe and Helen got married, the couple lived here in Southie before eventually buying a farm and moving to Sudbury. They first lived above Joe’s Spa on West Broadway and then later in the Hotel Eaton on Emerson St. While Joe’s Spa is gone, the  hotel is now a condo building (surprise!) and was the site of a tragic fire in late 2007.

After Babe was traded to the Yankees in 1920, Helen moved with him to New York City but their marriage didn’t last. They separated around 1925 and Helen eventually came back to Massachusetts. She tragically died in a house fire in 1929.

Helen Woodford wasn’t Ruth’s only connection to Southie though. Throughout his life, Ruth was an active member of the Knights of Columbus (the world’s largest lay Catholic family service organization) and the chapter he joined in 1919? The Pere Marquette Council 271 right here in Southie! Babe helped to popularize baseball by playing exhibition games sponsored by the Knights of Columbus during the off-season. During those “tours” he’d play baseball and also visit sick children and kids in orphanages. The Council Babe Ruth joined, here in Southie, is still active today.

Also still here is Babe Ruth Park Drive which has existed here in South Boston since 1968, 20 years after the superstar’s death. The street naming ceremony had over 1,000 attendees and Babe Ruth’s second wife sent a telegram to Joe Moakley, who was a state senator at the time: “Sincere thanks and appreciation to you for your splendid aid to the South Boston Babe Ruth League especially in regard to the naming of Babe Ruth Park Drive”. 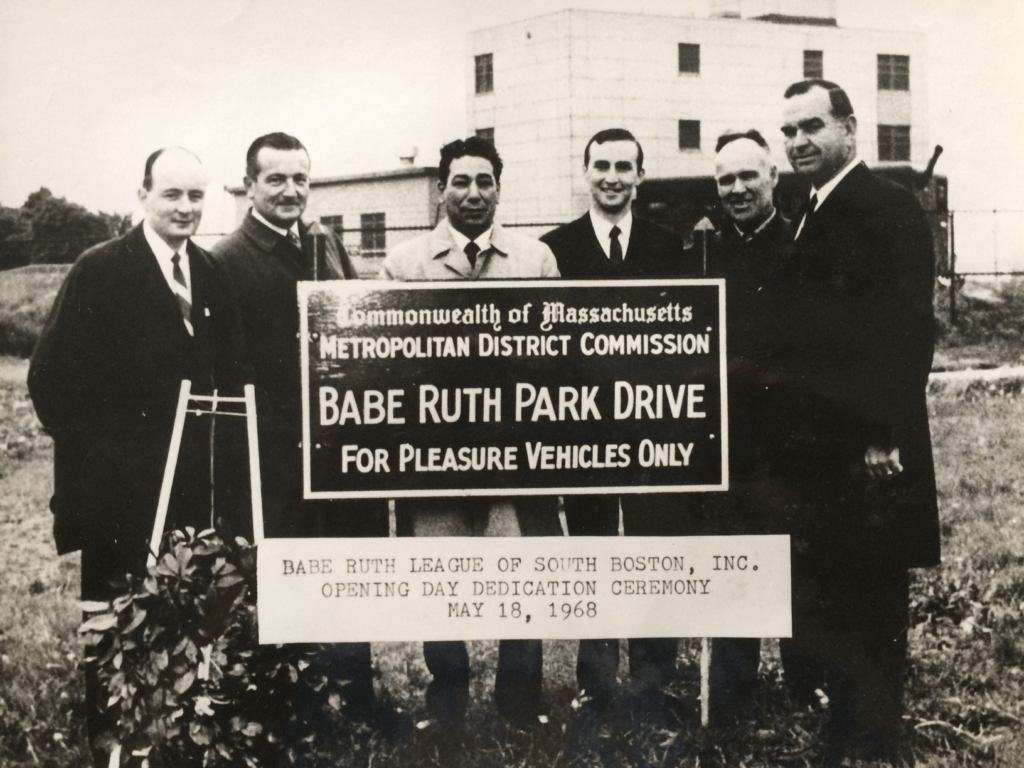 George Lally, whom you can see in the picture, was a tremendous resource in learning about the naming ceremony. Thank you, George, for helping to make this History Lesson complete!