Welcome back! It’s time for another CIS History Lesson! But first a (terrible) joke:

A: Because they’re afraid of the net.

I swear that uncle joke will be relevant to this History Lesson!  Did you know that our neighborhood used to be home to the only aquarium in Boston? That it had 20,000 visitors in one day? Crazy, right?

In the 1880s the Boston Society of Natural History wanted Boston to build a system of “Zoological and Aquaria Gardens” to rival similar places in major European cities. They decided to build the zoological part in Franklin Park but they wanted the majority of the aquaria sites to be located in South Boston. The Society had to wait a bit on a decision by our federal government; they were deciding what to do with Castle Island and whether is should be connected to the newly formed Marine Park (formed by leveling the ground and filling in the marsh flats that were there).  The Society wanted the aquarium to be built on Castle Island but that was not to be because of land use restrictions put on Boston by the federal government when they turned Castle Island over to it. The Society decided that putting the aquarium in the newly created Marine Park would be a great option. They wanted the aquarium to be open by 1892.

It didn’t quite work out the way the Boston Society of Natural History wanted it to but in 1912 construction of the aquarium was complete, thanks to a large donation to the City of Boston from the Parkman family. The Parkman family’s donation of $5.5 million dollars to the City of Boston in 1908 (in 2018 that would be the equivalent of a donation of over $150 million dollars!!!!) established the Parkman Fund. That fund helped to build not only the aquarium but the Franklin Park Zoo as well.

The aquarium opened on November 28th, 1912 at 1pm. The first paying customer? 11-year-old Patrick Flaherty of 64 O Street! The aquarium was only opened for 4 hours on the first day but it had 6,000 visitors! The first Sunday it was opened, it had 15,030 visitors! People think traffic in City Point is bad now! According to the Boston Globe 17 cars were waiting to turn down Farragut Road that day!

The aquarium continued to be a destination for many years. On a Sunday in November of 1919, 20,000 people went. At the time, South Boston enjoyed an elevated trolley line which many people took. Print advertisements from 1925 say, “ When Sight Seeing visit the Aquarium at City Point via the Boston Elevated.” Imagine that?! 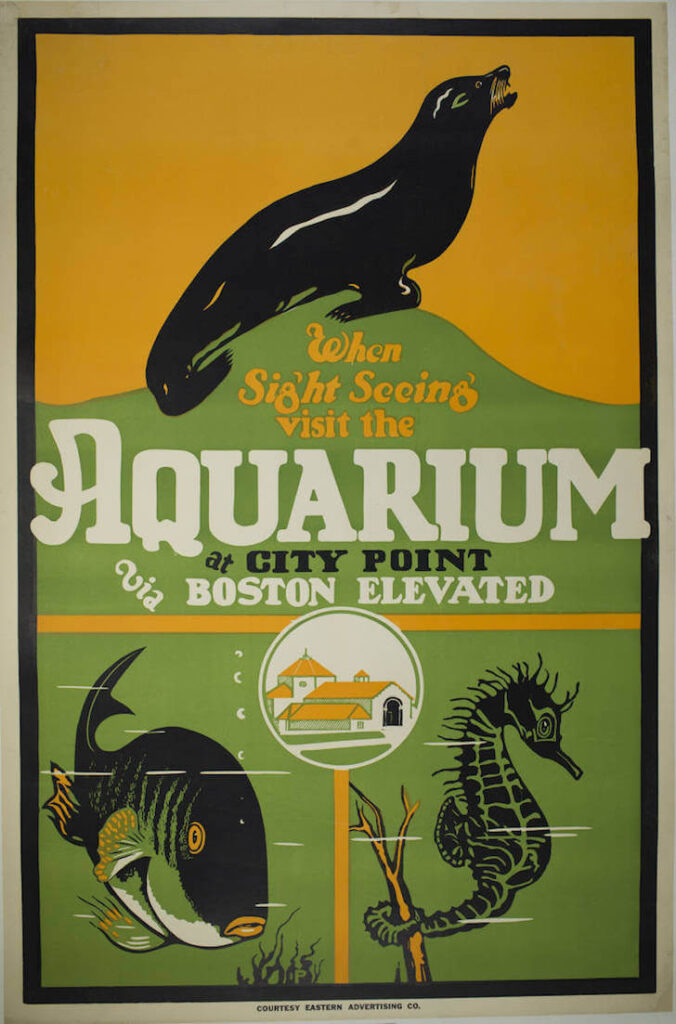 The Great Depression and World War II hit the City of Boston and the aquarium hard. Very little investment was made in the site; the building and the exhibits fell into disrepair. Needed improvements were estimated to cost over $300,000 dollars in the 1950s. Due to lack of interest and lack of will, to fund the repairs, the aquarium was closed on October 1st, 1954 and the building was demolished. Tennis courts and the ice hockey rink now cover where the aquarium once stood.

So back to our uncle joke, the fish can’t play tennis but now you can!  Ouch.