Local dog-training business Falco K9 is hosting a particularly special event this week. On November 8 at 7 p.m., Paws for Pat will raise money to cover local #Southie resident and Marine veteran Pat Beauregard, who’s battling stage IV colon cancer. It’s taking place at Seapoint Restaurant (367 E 8th St—tickets will be $20, cash only, at the door) and it’ll be an opportunity to meet Beauregard, his family, and Falco K9 owner, Tyler Falconer. Sadly, dogs will not be at the event (I already asked), but if you ask nicely, Falconer might share some of his hilarious training videos with you.

If you’re not familiar with Falco K9, the business provides classes and services ranging from plain old obedience lessons for your unruly puppy all the way up to advanced training with security dogs that are used by police and the military. It’s also the source for some of the funniest Instagram videos you’ve ever seen, with Falconer regularly putting on a black and red plush suit, the better to be attacked by young dog trainees whose sole mission in life is to rip his arm off. There’s a reason why he has thousands of followers; even non-dog owners like me are regularly entertained by him and his eager canine counterparts. “I’m getting mauled all the time,” he laughs.

Falconer’s a Navy veteran, and he left the military in 2014 after a successful run as a working dog handler. He moved to Southie with the hopes of continuing his work and also works as a firefighter/EMT at the Burlington Fire Department. Falconer started Falco K9 in 2016 out of a studio apartment on I St, but has now expanded way beyond his initial offerings. At this point, he’s worked with over 1,000 dogs and counting, and he’s brought on family members and other staff to join him in the training—and poop-cleaning, naturally. 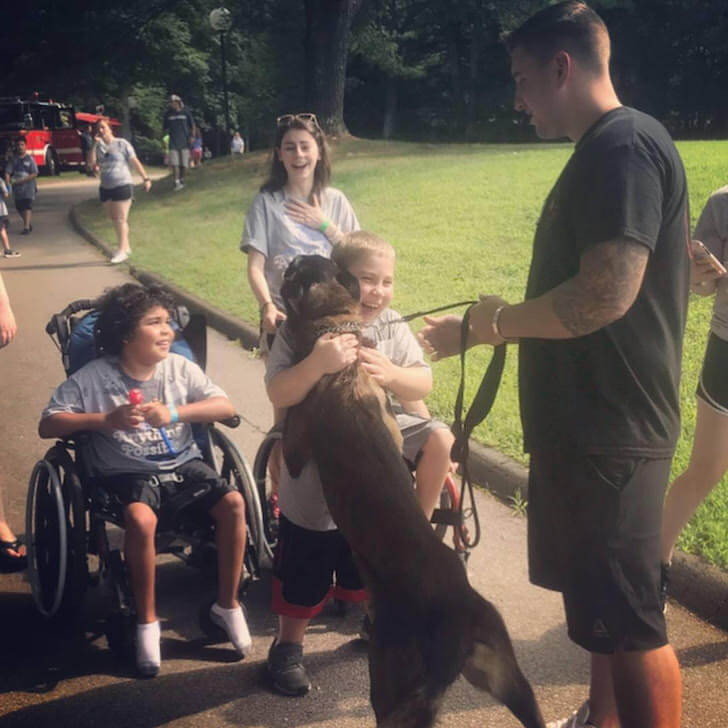 Of all his many courses, the intermediate/advanced class is the most popular. It’s a kind of badge of honor for local dogs to make this level and “graduate” on to being good (well-trained) fluffy friends in the Boston community. He also just started “Day School,” which provides day care with the added structure and training to ensure the time is productive. Of course, that account has its own Instagram too, where owners can spot their own dogs, if they’re lucky.

Falconer has worked with local celebrities, including Bruins’ players and a Patriots player, on training their dogs, but he says the biggest thrill was actually working with longtime Southie resident and local gym owner Peter Welch. “I want to be a big community guy like him—he’s the biggest role model for me,” he explains. At this rate, he’ll give the next Mayor of Southie serious competition, because he knows just about everybody.

As a matter of fact, Falconer met Beauregard, who also lives in Southie, when the latter brought his puppy Ruby in for training. Falconer jokingly calls Beauregard his “man crush, now and forever,” and was inspired to take care of his friend and fellow veteran. In addition to Paws for Pats and a custom shirt for the event (it has the silhouette of Ruby on the back), Falconer even set up a GoFundMe to help with covering Beauregard’s treatment.

“Pat is such a great guy and a positive person—he’s become such a spokesman for Dana Farber and for awareness of colon cancer,” he insists. “This event is for us to support and stand by him.”