Comedian Will Noonan Taping a Special At Capo – Get your tickets!

The iconic Seinfeld theme music was background noise in Will Noonan’s house growing up, along with Richard Pryor albums that his parents would play. At the dinner table each night, the roast beef or chicken and mashed potatoes would get cold as the running comedy show between his parents, his brother, his sister, and himself went on. Who would win tonight’s round of coming up with the most puns about something?

The Southie-based comedian was surrounded with laughter and his foreshadowing career as he grew up, but it wouldn’t be until he went to college that he realized it was his true calling.

Bill Murray was – and still is – his hero. Ghostbusters was his favorite movie, and his “Don’t hassle me, I’m local” What About Bob? shirt still makes appearances in Southie to this day.

Noonan was set on being an actor, gearing up to be the one to call rather than the Ghostbusters, when someone asked, “Who you gonna call?”

So, he did as any aspiring actor would do and moved to the Big Apple. It wasn’t until he made that move that he realized comedy was even a possible career path. As fate would have it, there just so happened to be a comedy club next to one of his acting studios. One evening, Noonan walked in and hopped up on stage to perform at an open mic night.

“As Oprah would say, it was an a-ha moment,” Noonan said. “These were my people. This is what I’m supposed to do with my life.”

After that, he had additional retrospective a-ha moments, like looking back on when he was a theater kid at home in Milton.

“Now that I’m a stand-up, it makes a lot of sense. But I was always trying to change the script to make it funnier and get more alone time on stage,” Noonan said. “It’s almost like I knew I was a comedian, but I had to figure it out and find my way into it.”

To him, finding his way into it was seemingly impossible, like trying to become a Red Sox player. It was like being in some sort of mafia, having to hang around people until he eventually got invited to things. Noonan went from being a kid, watching Bill Burr perform for the Boston Police Department to opening for him a handful of times.

To this day, Burr is the rare celebrity who Noonan still gets starstruck over. Burr recently performed at Capo’s Comedy Night.

“Every time I talk to him, it’s like I’m talking to the hottest cheerleader on the team,” Noonan said. “It’s like, “Hey, what’s up, wanna play Fortnite?”

But view the Fortnite invitation as a compliment! Noonan respects Burr beyond measure, and he says coming on too strong sometimes is always worth it.

If anything, it plays into Noonan’s whole mantra, if you bomb, you bomb. Not everything is always going to land or get across as you hoped. In other words, Bill Burr is not always going to accept your Fortnite invite. And that’s okay!

As for how Noonan comes up with his material? Initially, he wrote jokes based on things that happened in his real life. Then, he ultimately decided that he could do better. So, he started making things up!

While sometimes jokes just fall in his lap, like when his dad couldn’t remember the word “cookie” and called them candy crackers, most of the time it takes Noonan months to write a solid joke.

You might think that comedians have one or two go-to people on who they test all their material on initially. Nope. Instead of that, Noonan’s guinea pigs are whoever is in the basement of Capo on Wednesday nights, where he has performed every week for the last five years. 90% of the time, that is where he tests the waters.

So, it only makes sense that his first special will be filmed there too! 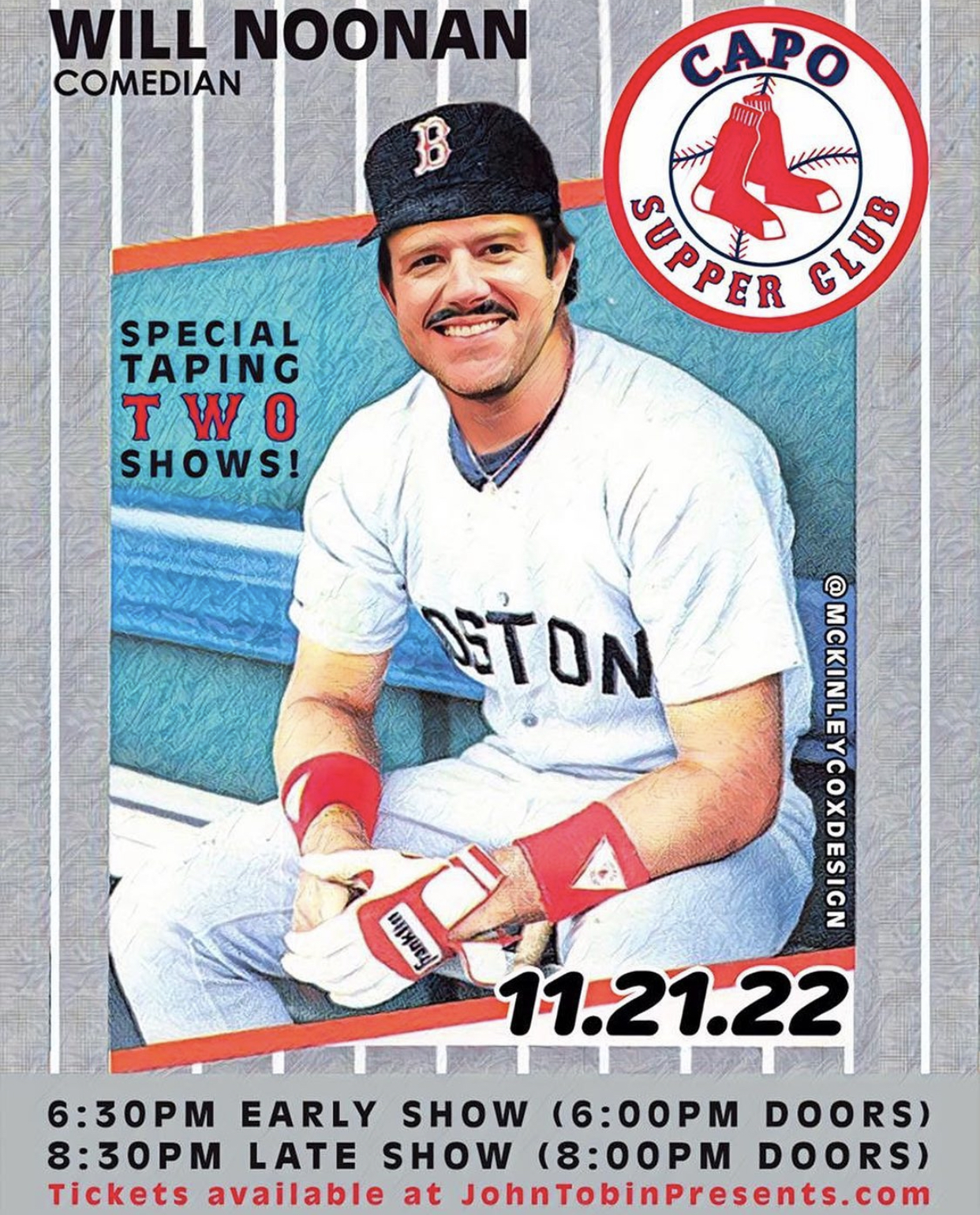 “This sounds so corny (I can dip into corny territory sometimes) – I really consider Southie my home,” Noonan said. “The Capo regulars and the people who read Caught in Southie I consider friends and family. I want them there.”

To him, everything at Capo is “home cooking,” and he isn’t just talking about the food. It feels like home there, and he wants to showcase the cool atmosphere that the Supper Club embodies.

“I’m just a Boston comedian, but when I walk around in Southie with comedians from out of town, they’re like, “Everyone fucking knows you! You’re like a big star,” Noonan said.

To join the local paparazzi and Will Noonan Fan Club, go see his show on Monday, November 21st at 6:30 PM or 8:30 PM – or both! Buy your tickets today! And if you can’t make it to the taping, be sure to follow Noonan on Instagram and subscribe to his YouTube channel so you can watch when it is all said and done.