Battle of the Masks is nothing new – but wearing one helps.

It seems wearing masks is causing controversy during the pandemic. Either you’re fine with wearing a mask and abide by the safety guidelines created by the City of Boston and the State of Massachusetts or you’re anti-mask and won’t wear one.

But the anti-mask movement is nothing new.  Way back in 1919, an ad ran in the San Francisco Chronicle promoting an “anti-mask meeting” at the Dreamland Roller Rink to get a crowd organized to protest against the mask ordinance  – sort of the 1919 community bulletin board on Facebook. 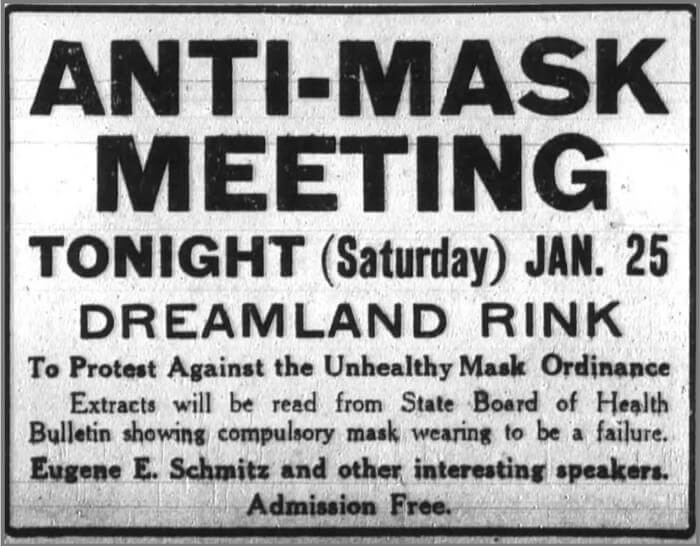 Initially at the onset of the Pandemic of 1918, mask ordinances were put in place and most people complied – especially in part due to the patriotic duty angle of wearing masks.   You see, the nation was still fighting in World War I, and officials pushed safety measures like masks as a way to protect the troops from the pandemic.

But after WWI ended, the dispute over to wear or not to wear a mask spread across the entire country as the flu continued into its second year – yes, second year….

Basically, residents grew tired of mask wearing as the pandemic dragged on. Cities that passed masking ordinances struggled to enforce them among the small portion of people who rebelled and refused to wear them (known as Mask Slackers). Common punishments for Mask Slackers included fines, prison sentences and even having your name printed in the paper. (Shame, shame, shame!) 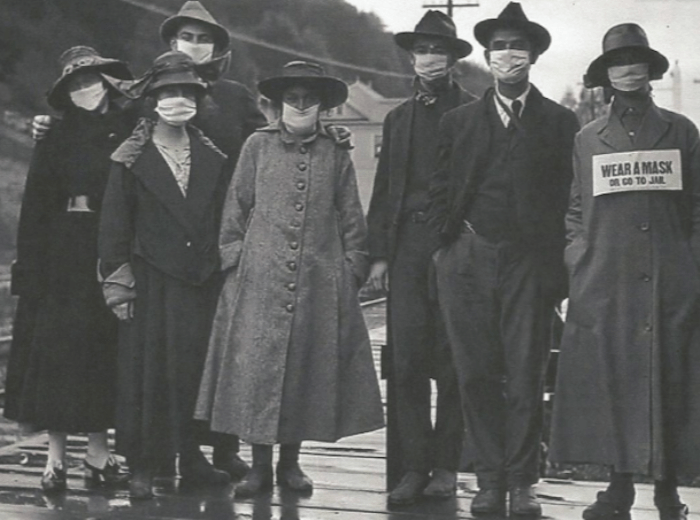 Currently during this pandemic, some people seemed reluctant to wear a mask from the jump.  Some people also refused to practice social distancing.  And now as COVID-19 is stretching through the summer months, some people have slipped into dangerous actions like not wearing masks in public and gathering in large crowds.  Massachusetts is now seeing an uptick in COVID-19 cases.  Gov. Baker discussed on Friday during a press conference COVID clusters emerging through the state via large parties like a group of lifeguards in Falmouth and a large restaurant workers party in Chatham and most recently a prom party of 100 people in Cohasset.

Both Mayor Marty Walsh and Gov. Baker on Friday reminded everyone to keep wearing masks and for the love of God please don’t have giant parties or gather in large groups where you can’t property social distance.

Bottom line – we need to do better.

Way back in 1918 and 1919, communities that implemented stronger health measures and regulations like mask wearing and social distancing overall made out better i.e. lower death rates and influenza cases than those that didn’t.

So let us learn from the past – wearing a mask and social distancing helps – so just do it!