Everyone in this country knows that the place to be for the St. Patrick’s Day Parade is Southie, USA.

That’s why about a million people travel from all over to celebrate Southie/Irish heritage or just to drink their face off. With so many people coming to a neighborhood that doesn’t have enough parking for all of its residents, how do you get here and where the hell do you park.

The local authorities recommend that you take the MBTA. The train lets you out at either the beginning (Broadway Station) or the end (Andrew Station). That’s probably okay if you’re traveling light and you want to watch the parade down the lower end (that’s the Broadway Village area of Southie for anyone new to the neighborhood in the last 5 years.)

But what if you are going to an open house down City Point/East Side? Both train stations are a good 1 to 2 miles away from the Point. And what if you’re not traveling light? How are you supposed to lug three kids under six years old with all their gear, along with an appetizer and a case of festive St. Patrick’s Day Special Edition Bud Light aluminum bottles a mile and a half on foot to the open house party? Nearly impossible.

So you have drive. But where do you park? You don’t. You double-park. And you double-park almost anywhere you want to. Drive as close as you can to your open house and just leave it there, blocking someone in. If you can get close enough to keep an eye on your car – great. If not, don’t worry – just leave a note on your dashboard with the address of your open house and your cell phone number. If someone has to leave, they can just call you or come by the open house. The bonus is you get to park in their vacated spot. Everyone wins.

You may say, “Won’t I get a ticket or even towed?” Highly unlikely. Before the parade, the cops are keeping an eye on all the 20 year olds walking down the street with green Solo cups. During the parade, the police are busy watching the parade crowd – looking for suspicious activity and drunk and disorderly conduct. So the cops have bigger fish to fry. As soon as the parade is over and the street sweepers go by, get your car and park in a legal spot on the parade route. There will be plenty of spots if you’re fast enough.

Don’t come crying to me

If you are someone who has visited Southie before and been fascinated by the way we park, double-park, and drive, here’s your chance to park like the locals. Of course, if you do get ticketed or towed, don’t come crying to me. Double-parking is illegal. 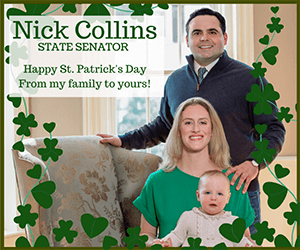