The new districting map has been passed by the city council. The final vote was 9-4.  The four no-votes were Baker, Flaherty, Flynn and Murphy.

This road to redistricting has been a bumpy two months, to say the least. Just this week, Flynn has called foul on the process.  After Breadon revealed a slightly amended redistricting map, Flynn released a statement of opposition on Monday.

“I’m strongly opposed to the latest amended version of Docket #1275, also known as the Breadon-Arroyo map, which my colleagues at the Council and I received this afternoon, nearly 48 hours prior to the vote at our regularly scheduled Council meeting. This map further divides District 2 along racial lines, as it cuts the Boston Housing Authority developments out of South Boston, including the Anne M. Lynch Homes at Old Colony, the West Broadway Development, and West Ninth St Apartments.”

On Tuesday, Flynn pushed a little further by calling for a halt to the redistricting process in addition to the establishment of a Blue-Ribbon Mapping Commission. “This Commission can comprise of appointments made by the City Council, the Mayor’s Office, Secretary of State, and the City of Boston Election Department.”

Flynn has been on high alert, especially after Breadon, City Councilor Ricardo Arroyo and a coalition of local organizations including the NAACP unveiled their new map.  This map – in addition to at least one other map – will divide the neighborhood of South Boston into two districts.  Currently, City Council President Ed Flynn represents the bulk of the neighborhood  (District 2) and Councilor Frank Baker represents one all-Southie precinct along with his majority Dorchester district (District 3).

Under the new NAACP map – which some are referring to as the “unity” map, Baker’s district would gain at least four more South Boston precincts. According to the Boston Globe, residents are concerned that under that plan Southie’s most vulnerable voices would be silenced.  Two public housing developments (Anne Lynch Homes at Old Colony and West Broadway Development) would be divided between the two council  Districts 2 and 3.

The complaint cites three instances where too many councilors met without public notice: Oct. 10 in the Bolling Building, Oct. 18 outside of City Hall in a press conference and Oct. 19 at the Condon School.  10 of the 13 councilors were named in the complaint— everyone besides Kenzie Bok, Gigi Coletta and Kendra Lara.

According to the Boston Herald, Dorchester is following suit with record requests and filing its own open-meeting complaint as South Boston organizations did. 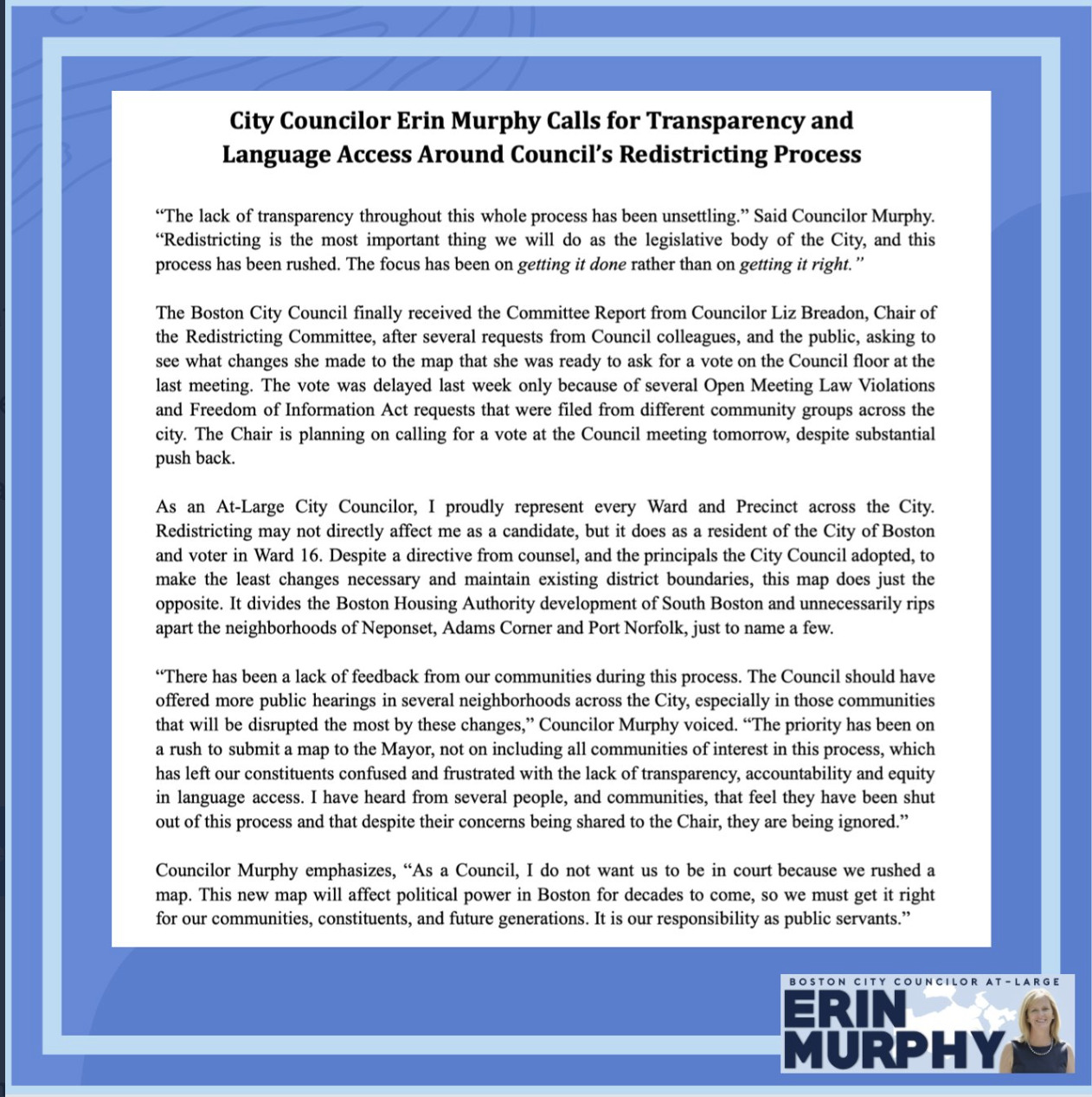 According to the Boston Herald, there are several councilors and advocates pushing for a vote on the map citing Nov. 7 as the deadline. That’s a year from the next municipal election, and that’s how long people have to live in a council district before running. In other words, proponents of that deadline stated that a lack of clarity of who’s in what district past could make it difficult for prospective candidates to know what district they’d be running in.

On the flip side, you have Flynn, Murphy and City Councilors Michael Flaherty and Frank Baker who believe this “deadline” isn’t the issue it’s made out to be.  These councilors are pushing for more time to ensure redistricting is done correctly.

The Boston Globe also came out with an editorial urging the city council “not to rush.” You can read that here.